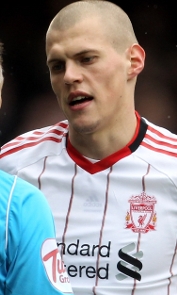 Kenny Dalglish today spoke of how Martin Skrtel has grown in stature this season as the Slovakian prepares to complete a remarkable feat of playing in every minute of every Barclays Premier League match.

Just one other outfield player can boast such a record - Everton's Player of the Year Leighton Baines.

Dalglish told reporters ahead of Sunday's trip to Villa Park: "It's a fantastic achievement but we have to wait and see if he's playing on Sunday or not! No, I wouldn't like to spoil that perfect record.

"He's been fantastic this year and really grown in stature. He's been a real asset for us.

"He gets credit from the people who really matter - the people here. He wouldn't have played every game if not."

Dalglish has been impressed with the reaction of his players this week.

"I don't think they were too happy but they've got the chance to put that right on Sunday," said the Scot.

"Training has been good - it's always good. They are looking forward to the game but the disappointment should be there.

"There were some positive vibes that came out of the game on Sunday."

Click the image below to watch Kenny's pre-match press conference

Liverpool need to better the result gained by Tottenham at home to Birmingham to qualify for continental competition next term.

On how closely he will be following events from White Hart Lane, the boss added: "Everyone knows the results from most matches whether it's the first, last or middle game of the season. You know what's going on at most places.

"It'll be no different on Sunday but we'll concentrate on our own game and see if we get any favours from somewhere else."

Some have questioned how beneficial entry to the Europa League is for clubs such as Liverpool, with participation meaning most Barclays Premier League games are shifted to Sunday.

But Dalglish won't be drawn into a debate about the competition's value.

"The most important thing for us is to win the game on Sunday and see where it takes us," he said.

"If we're in the Europa League we're in it, if we're not we just have to get on with it."

On whether not being in the Europa League would harm our chances of developing youngsters or attractive players, Dalglish added: "Maybe a couple of your points are fair, but a couple of them don't make any difference.

"On developing young players, we're going into a competition next year that will help develop young players in Europe. That's not an issue."

Aston Villa have nothing but pride to play for on Sunday having secured their top-flight status despite a serious illness to their manager Gerard Houllier.

In his absence caretaker boss Gary McAllister has overseen some impressive results, including a victory against Arsenal last weekend.

Dalglish added: "The illness to Gerard doesn't help but they are both fantastic footballing people and they've done the most important thing - keeping Aston Villa in the Premier League.

"I'm sure Gary would much rather have Gerard in the role he was meant to be in when he went there, but fate took over. He's done well to keep them up.

"Villa had a fantastic result last week at the Emirates. It's their last home game and I'm sure they'll want to finish the season on a high. They'll be well up for the game."