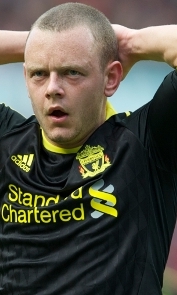 KD on Aqua future and transfers

Jay Spearing claims he was always determined to prove himself at Anfield - even when first-team football was difficult to come by.

Spearing has been on the fringes of the first team for several years but has established himself as a Barclays Premier League regular under Kenny Dalglish.

Ten of his 19 appearances in 2010-11 have come in the league - more than tripling his previous tally.

All this has come after a loan spell to Leicester City last season.

Spearing said: "I really needed to get out on loan to get some first-team football in order to progress, so my time spent playing for Leicester was good for me because it helped to bring my football education on to the next level.

"I enjoyed it but I was always determined to come back and prove myself at Anfield.

"I remember at one point there were six players in my position in front of me and it was hard to see when I could possibly be given the chance to break into the first team.

"Many of the lads I played with back then have moved on but, fortunately for me, times have changed and I have been given a chance to show what I can do.

"I certainly didn't expect to be involved without putting in the graft to get into the side but, after Roy Hodgson came in, I got the opportunities to play.

"He, and then Kenny Dalglish, showed faith in me and I can't thank them enough for that."

Spearing has been joined on Dalglish's teamsheets by fellow Academy products Martin Kelly, John Flanagan and Jack Robinson, though at 22 he has a few years' more experience than his counterparts.

He added: "Stevie G and Jamie Carragher were the last ones to come through, so it's been a while since Liverpool produced players good enough to break into the first team.

"It just so happens myself, Martin Kelly, John Flanagan and Jack Robinson have all broken into the team around the same time.

"I think that we'll sign a couple more decent players in the summer and also bring a few more youngsters into the squad next season."