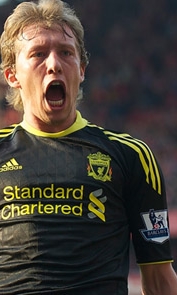 Lucas Leiva believes getting back into the Champions League is the priority for Liverpool next season.

The Reds will sit out Europe's premier club competition for the second year running in 2011-12, but with new owners at the helm and Kenny Dalglish overseeing a revolution on the field, Lucas is confident it won't be long before Champions League nights are back at Anfield.

He said: "We want to get back into the Champions League because it is where Liverpool belong. We will do everything we can.

"We can see the owners and everyone involved is trying to strengthen the squad. They are working really hard to make a good team, so hopefully next season will be a good season for Liverpool."

Lucas also revealed he sees his long-term future at Anfield, having signed an extended contract with the club in March.

He continued: "My plan is, of course, to play for Liverpool, win trophies and be a key player for the team.

"Hopefully I will achieve my individual targets and then do really well with the team as well."