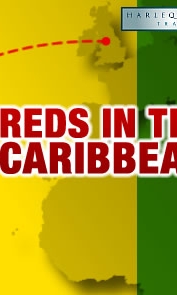 Liverpool U18s wowed a passionate Caribbean crowd as they romped to a 4-1 victory over St Vincent U20s on Thursday afternoon.

The hosts played with a determined spirit throughout and netted a deserved consolation late on when the impressive Myron Samuel converted from the spot.

The U18s came into the encounter on the back of the heartbreaking 2-2 draw with Wolves on the final day of the league season and they were keen to put their title woe behind them by ending the campaign with a trophy.

And they could have been ahead inside 10 minutes but Kristjan Emilsson was unlucky to see his header from a right-wing corner cannon back off the crossbar.

The early momentum was with the visitors and Krisztian Adorjan showed just why he is one the team's stand-out performers this year when he sold his defender an outrageous dummy before firing in a shot from a tight angle that bounced back off the near post.

The home side had rarely threatened and after surviving the double scare they began to get a foothold in the game with the lively Samuel looking particularly dangerous.

The big No.9 has pace to burn and he almost snared a shock opener when he beat Jamie Stephens to a through ball, only to see the Reds stopper recover in time to keep his effort from the byline out.

It had developed into a very even battle as half-time approached and Samuel came close again on 40 minutes but this time he was denied by a stunning stop from Stephens.

Liverpool would probably have been happy to go in at the interval all-square but with just 60 seconds remaining they took the lead when Mukendi capitalised upon a defensive lapse to crash home a right foot shot.

Borrell had made no secret of his desire to give all of his 20-man squad a run out and he opted for several changes at the break with Ngoo making an almost immediate impact by doubling the Reds' lead soon after.

It was a huge blow for the St Vincent youngsters and they were undone again just moments later when Cuffy deflected a Patrik Poor ball beyond his own 'keeper.

At this point the game was over as a contest and it began to look ominous for the home team when Coady made it four with an accomplished spot kick just prior to the hour mark.

The away side continued to manufacture chances at will but despite going close on several occasions through Adam Morgan and Toni Silva, it was Samuel who had the final word when he coolly stroked home a hotly-disputed spot-kick.

The final whistle was met by scenes of jubilation and the Saint Vincent crowd showed good sportsmanship when they took to the pitch to congratulate the Liverpool players on their end of season trophy success.