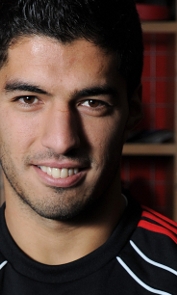 John Aldridge believes Luis Suarez should be crowned Liverpool's Player of the Season despite arriving just four months ago.

The 24-year-old has scored four goals and tallied five outright assists in 12 appearances since signing from Ajax during the January transfer window.

But Suarez's impact on the side has been incalculable, with his presence inspiring memorable team performances against Newcastle, Manchester United and Fulham amongst others.

Watching from the press box where he commentates for local radio, Aldridge has been impressed: "I know he's only been at Liverpool four months but my player of the season is Luis Suarez.

"I can understand why some people have gone for Lucas Leiva because he has been much improved and has answered his critics.

"Dirk Kuyt has been great in the second half of the season, while Jamie Carragher has been a model of consistency at the back.

"But for me, Suarez has lit the place up. We were all in need of a lift at the end of January and he has provided it.

"Suarez has been magnificent and I've loved watching him."

Suarez has been key in helping transform Liverpool from also-rans to European contenders, though the club's quest for Europa League football was dented by a 2-0 defeat to rivals Tottenham on Sunday.

Aldridge added: "We've come a long way under Kenny Dalglish over the past few months but Sunday's defeat to Spurs showed just how far we've got left to go.

"The work he does with Damien Comolli is going to be crucial to our hopes for next season.

"Back in 1987 Dalglish strengthened Liverpool with the likes of Peter Beardsley, John Barnes and Ray Houghton. He will be hoping this summer's signings have a similar impact.

"It was good to hear Dalglish speaking positively about his relationship with Comolli.

"He seems happy to have Comolli's help but the manager must have the final say on who is brought in."