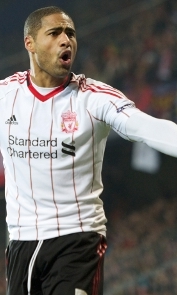 Blog: Why Raul's my main man

Glen Johnson believes Lucas Leiva has been Liverpool's best player during a turbulent 2010-11.

The Reds are still competing for a Europa League place going into the final match of the season but our England full-back can't help but wonder what the team could have achieved if they'd begun their good run of form earlier.

Regardless of where Liverpool finish in the table, Johnson believes one player deserves more plaudits than any other.

"I would say Lucas," said Johnson, when asked for his Liverpool Player of the Season in this week's LFC Weekly. "There were rumours at the start of the season that Liverpool were going to sell him but the way he's performed just shows you how quickly things can change in football.

"At the minute he's probably one of the first names in the starting 11. He's won the fans over now for sure, so fair play to him. I'm obviously very pleased for him and his family. He deserves the recognition."

Johnson hopes Lucas and the rest of the squad can keep their good form going into next season to get off to a better start than they did this campaign.

"People talk about ifs, buts and maybes and if we'd had this form at the start, we would have been challenging for the league. But obviously you could say 'what if' about most things.

"Coming up to Christmas we were nearer the bottom of the league than the top and that's obviously crazy. If somebody had told you at the start of the season you'd have just laughed about it. But the lads have shown great character, everyone's stuck together and we've pulled it around.

"It's definitely been a league of two halves for us. It's very frustrating because you can't help but reflect on the fact that if we'd have made a better start and picked up points against teams that we should have beaten we would have been fighting for the Champions League spots.

"The results at the start - well, there were some shockers in there. But when you look at where we are now we know that even if we had picked up a couple more wins we could have been very close.

"That's the frustration but it's in the past now and everything happens for a reason. We're flying now so hopefully this will continue and we will be fighting for the title next year."

The full Glen Johnson interview is part of a special edition of LFC Weekly celebrating King Kenny's new era as manager. This week's mag also includes an exclusive interview with Phil Thompson as he talks us through one of the most exciting weeks in Liverpool's history in May 2001.