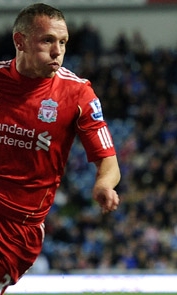 Win a chance to play at Anfield with Lucozade

Spurs fan and Sportinglife.com journalist David Tickner provides the view from White Hart Lane ahead of Sunday's showdown at Anfield.

How are you feeling about your trip to Anfield?

A bit 'meh' really. Which annoys me. Even though it rarely brings any success, it's always been one of my favourite games on the fixture list. But I'd quite like this season to be over now to be honest. We've had some cracking fun along the way, but it's starting to feel like a great party that's dragged on a bit and we should all go home to our beds before we make fools of ourselves.

Confident you can still get a EL place?

Do you want a EL place?

No. Well, it's obviously not that simple. If I thought for one second we'd have any kind of serious attempt at winning it then I'd be a bit more up for it. There aren't many trophies to go around, and the domestic ones don't look like getting any easier to win. It's the Thursday nights that's the problem; it's a season wrecker. There are just so many games to plough through before it gets interesting. And by definition once you reach that point it can all be over pretty quickly as both you and City saw this season. I can see why Redknapp doesn't particularly want it. It's basically like the Carling Cup; while you're in it you really want to win it - I've never yet see a team look anything but chuffed to lift the Carling Cup - but if you're not in it anymore you really don't notice it's there. Until Arsenal lose entertainingly in the final.

Why do you think the wheels have come off your season a bit after a fantastic start?

We took our eyes off the Barclays Premier League ball after the victory in the San Siro. Our season unravelled around two Peter Crouch incidents: his goal in Milan and his red card in Madrid. We've been bobbins ever since.

Whoever plays on the right for you against our shonky left-hand side. Without Disco Assou and the Simian it all looks a bit iffy there with Danny Rose neither a left-back nor a Barclays Premier League footballer. Central midfield will, as ever, be crucial. If Modric and Sandro can exert some control in there then we've a chance.

Players you're worried about on either side?

The lad Suarez. I was laughed at for saying he's a better version of Tevez, but he really is. Great workrate, quick feet, vision (and the ability to make best use of it) and that little bit of indefinable magic. Star quality. My early shout for next year's player of the season. And he can even play in goal. And Maxi. Probably worth keeping an eye on a fella with seven goals in his last three I reckon.

Highs and lows of the season?

The obvious highs are the wins over Inter and AC Milan; both thoroughly deserved and two of the best performances I've seen in my time following Spurs. While the Inter victory was perhaps the more thrilling and emotional, the win against AC in the San Siro was more satisfying. We were a proper side that night. Not just gung-ho attack but controlled aggression, rock-solid defence and livewire counterattacking. Plus Gattuso's meltdown. The 3-2 win at the Emirates was also great for being hilariously undeserved. That 1-0 win at Chelsea the other week wasn't bad either...

The lows are the infuriating series of shoddy home draws against the Barclays Premier League's lesser lights. Despite what 'Arry would have you believe, it's the ridiculous number of home points we've tossed away like confetti that cost us fourth place rather than Man City splashing loads of cash.

There would be more questions about Harry Redknapp if he wasn't the darling of the press. Discuss...

Undoubtedly. Especially if he wasn't English. One win in 10 games is relegation form - especially given some of the opposition during that run was not from the top drawer - and if we'd started the season like that he'd be out of a job. Clearly that would be a bit mental, but it's not unreasonable to ask questions of a manager who has failed to get a last push from his side when there was still so much to play for. His constant attempts to blame anything and everything apart from himself when things go wrong are beginning to grate. That said, it's easy to get carried away with a run of bad form. While Redknapp's wrong to say this has been a great season, a top-six finish and a rollercoaster ride to the Champions League quarter-final wouldn't have had too many fans moaning at the start of the season.

Hopes for the summer?

Despite the dreadful recent run, we've clearly still got a pretty decent squad. If we can pluck a 20-goal striker from the ether and sign a decent centre-back to replace the broken King and Woodgate and ensure we don't need to rely on Gallas playing every game then all we need to do is hold on to the players we've got. Simple. The most important thing is that we don't lose Modric. He may not have won the Player of the Year awards or got Andy Gray hot under the collar but he's been our best player this season by a wide margin. Personally, I think Barcelona are sniffing around the wrong North London midfield playmaker, but I'm grateful for it. Hopefully 'Arry will work out at some stage over the summer that Sandro is Patrick Vieira not Claude Makelele and we'll really see what the Brazilian can do. Reckon he'll be a £20million player this time next year. And if Real Madrid want to chuck us another spare Galactico at a knockdown price on deadline day, I wouldn't mind.

Home win. Relatively comfortable. If I were a betting man, then odds of better than 2/1 for Liverpool to be winning at HT and FT would be my choice.