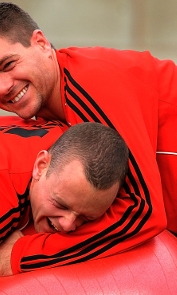 Steven Gerrard claims bringing Champions League football back to Anfield will be the first aim next season.

The skipper knows our revival under Kenny Dalglish will raise expectations for 2011-12 - and despite believing the future is bright, he is keen not to make any promises about what can be achieved.

"I'd love nothing better than to lead the lads to some silverware next year but I don't want to raise expectation by saying that will definitely happen," Gerrard told Liverpoolfc.tv.

"It would be stupid of me to raise expectations any more than they are already. At the beginning of every season at Liverpool expectations rise, and now that Kenny is staying and with a few signings I'm sure it'll go through the roof.

"Getting in the Champions League will be the main aim. I think it is for all the clubs in the Premier League. For financial reasons it's so important but it's also the biggest competition for players individually at club level.

"Everyone wants to be involved in it, we've had some fantastic nights at Anfield over the years in the competition and we all want to see those nights return.

"We just need to continue what we've been doing during the last six months. Hopefully we'll add some more players to strengthen the squad and then we need to compete. We are good enough to beat anyone on our day, we just need to find the consistency to challenge for honours."

Gerrard has not featured for Liverpool since our 3-1 victory over Manchester United on March 6, after which he underwent surgery on a troublesome groin.

He hopes to be ready for the first day's training after the summer break.

"I've had it sorted with surgery and hopefully next year I'll be fit and available after a good rest, with a brand new groin and ready to push on under Kenny," said the 30-year-old.

"I'm due to come back after 12 weeks, so it'll be around when the lads return on 4/5 July. Then I've got six weeks of pre-season to get match fit, so by the time the league starts I'm hoping to be in good shape."