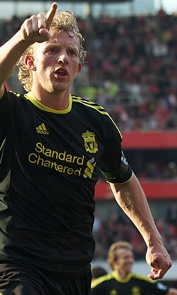 A week with our LFC trialists

Dirk Kuyt admits news of Kenny Dalglish's three-year contract left has him elated - and insists it is a 'privilege' to work under the tutelage of the King.

Dalglish put pen to paper on a permanent deal with the Reds on Thursday afternoon, and Kuyt believes it is just rewards for the Scot after masterminding a turnaround in the club's fortunes since returning in January.

He told Liverpoolfc.tv: "It is very positive and also well deserved. The whole team, including the manager and his assistants, are working really hard to progress and I think everybody can see we've done that so far.

"It's very exciting to look forward to the future and to know the manager will be there for another three years together with his assistants."

He added: "I think the future looks bright. Everyone can see we have a lot of quality in the team. Because of a couple of injuries, a couple of young lads came in and did very well and that is also positive.

"With the arrival of Luis Suarez and Andy Carroll we brought some quality into the team and I think everybody can see what that quality brings us."

Since assuming control in early 2011, Dalglish has taken Liverpool from a mid-table position to fifth place in the Barclays Premier League.

In fact, only Chelsea have garnered more points than the Reds during that period and Kuyt attributes that statistic to the increase in self belief and confidence the boss has instilled in the squad.

Click the image below to watch our chat with Dirk 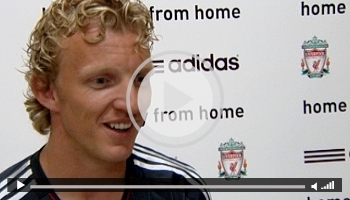 "The most important thing is that he helped us - he helped to give us our confidence back," said the Dutchman. "He convinced us we have a lot of quality, and so far it has been a privilege to work with him.

"He is very popular. The moment he came in, everyone was excited and then when we started to train and work together, everybody started to get even more excited.

"Obviously the results started to come in and everything is looking much better. The mood at Melwood is very good. If you see the lads training, everybody is enjoying it and the games are going very well, so everything is positive.

"I think it is a great move from the owners to make it clear before the end of the season and give the manager another three years and it will help us move even further forward."

Kuyt is one of several players who embody the change in confidence around Anfield since Dalglish returned to the helm.

The Dutchman has struck a remarkable nine goals in his last eight league appearances, including a strike in each of the last five matches - a feat not achieved by a Liverpool player since John Aldridge back in 1989.

Prior to Dalglish's return, Kuyt had found the back of the net just four times in 2010-11.

"He has done the same with me as he has with all the players," said the 30-year-old. "He gave me confidence. From the first day he arrived, he tried to help me - and that's happened with me scoring goals and providing assists.

"It's also been very helpful bringing some more quality into the team. I am linking up very well with Luis (Suarez), but also in the games Andy (Carroll) has played it has been a privilege to work with him."

While optimistic of a successful future, Kuyt is keen to stress the importance of ending the current campaign on a high - particularly as Liverpool will secure Europa League qualification if they can beat Tottenham Hotspur at Anfield on Sunday

"First we have to still be focused on this season because there is a lot to fight for," he stated.

"There was a certain period when we were down at the bottom of the league, and now we are in fifth place.

"It's in our own hands. We have to beat Spurs on Sunday and we will be back in Europe.

"After that, everybody will look forward to the future and taking Liverpool back where they belong."