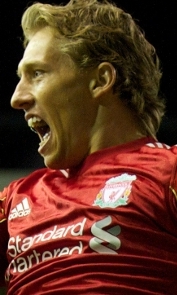 'We all want the same thing'

Kenny Dalglish has called for the Kop to reward Lucas Leiva's magnificent form by serenading him with his very own song.

The Reds boss has been delighted by the Brazil star's displays over the past few months and reckons he is now more than worthy of his own Anfield anthem.

Dalglish told his pre-match press conference: "He's been in good form since I came in here. He's also signed an extended contract and is playing really well. Him and Jay (Spearing) have got a really good partnership in the middle of the pitch.

"It would be nice if supporters could think up a song for Lucas as a reward for the fantastic work he has done recently. I don't know what it could be but there must be something there for him.

"He's only a young boy as well. He's played lots of games for a young boy. He's really developed. He's in the Brazil team and that's a good enough testament for us.

"What he has done for us is very important and he's been brilliant since I came in.

"You can see he has belief in his own performances. You can see that getting in the Brazil team and being settled - his wife having a  little boy - means his whole world is happy at the moment and that is reflected on the pitch."