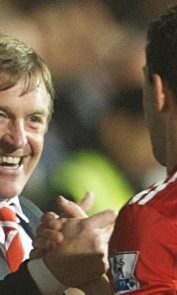 KD on Carroll, Spurs and Spearo

Kenny Dalglish believes all the right ingredients are in place to ensure Liverpool Football Club's long-term future is a bright one.

The Scot, along with first-team coach Steve Clarke, put pen to paper on a permanent three-year contract having excelled as interim manager since replacing Roy Hodgson in January.

Dalglish insists there is a real sense of unity at Liverpool now under new owners Fenway Sports Group, and he feels such harmony can provide the basis for a successful future.

He told reporters at Melwood: "We don't need anything else we don't already have. We've got fantastic support and that is a great help.

"The support is coming from everywhere. Everybody is pulling in the same direction and everybody wants the same thing. We'll do what we can to get there.

"But we're not going to sit and shout our mouths off about what we're going to do.

"The boys have been fantastic, especially recently, and we're not going to shout our mouths off about that either. We'll just go about our job, go about the preparation for the Tottenham game, which is the most important thing for us.

"We've got our reward for what we've done - and we've got to gain the reward for the next one."

After Fenway Sports Group acquired the Club last October, Ian Ayre was named as Liverpool's Managing Director in March, while Damien Comolli was promoted to the role of Director of Football.

Dalglish added: "Myself and Steve are delighted with the response from the Club. We're going to be working with fantastic new owners.

"Damien (Comolli) has been fantastically supportive to us, especially in the January transfer window - going out and finding players as late as he did was unbelievable.

"When Ian (Ayre) and Damien were announced (in new roles), I thought that was a fantastic step forward for the football club and I don't see any reason to change that.

"The place is much more stable now than it was before. The supporters have got wee smiles on their faces and it is up to us to keep that smile there for as long we can."

Since being appointed in January, Dalglish has steered Liverpool from 12th place in the Barclays Premier League to fifth in the table.

The boss, however, is eager to highlight the role played by coach Clarke, who was drafted into the backroom team shortly after the King's return to the throne.

Dalglish said: "We're delighted it has gone as well as it has done. I say 'we' because Steve is as important as I to the Club.

"We came in as a partnership - he came in the day after me - so we've both been here from the outset in January and he's made a great contribution.

"For two of us to come in and for it to go so well has really been enjoyable.

"We've been happy with everything since we came in - the way the players have gone about their work, their attitude and commitment to training and taking it forward onto the pitch, and their desire to be successful.

"So everything was pointing in the right direction."

He added: "The owners have been superbly supportive.

"Damien (Comolli) has been fantastic getting us up to speed with any players that might be coming about, so everything was in place.

"There might have been some people saying three or four weeks ago, 'Why hasn't it happened?' but we knew we were still going about our jobs anyway and do them as well as we possibly could.

"There was no need for anybody to dive in and make rash decisions, the Club or ourselves."

Such has been the turnaround under Dalglish, victory over Tottenham on Sunday will confirm qualification for the Europa League.

It was a feat many believed unthinkable at the turn of the year.

"I don't think anybody would have anticipated that in January when we started, but I think we've also got to be realistic and not get carried away," admitted Dalglish.

"We've got a really difficult game on Sunday and Tottenham have been unlucky because it's being so successful this year that's maybe cost them.

"We know what we're up against, they've got the same target as us to get a victory. Certainly if we get a victory we'll be delighted, but irrespective of the result on Sunday or against Villa in the following game I don't think what the players have done should be undermined in any way, shape or form.

"They've been fantastic in the way they've gone about it and to get us this close is a great credit to them."

Meanwhile, with his long-term future now secure, journalists were eager to question Dalglish on how much transfer activity there is likely to be at Anfield this summer and whether a repeat of January's big-money transfers can be expected.

He replied: "Whether it (spending) is massively or whether it's cheaply doesn't make any difference as long as you spend well. As long as the players are playing well, you've got a chance.

"Budgets are all very well and good, but they don't guarantee you anything.

"For ourselves, like every other football club, there will be movement in and out and I am sure there will be plenty of speculation.

"There will be movement in and out, it's part and parcel of pre-season and football clubs, and we'll be doing business. But the better we do the business, the more successful we'll be."

Click here to get your official King Kenny magazine>>