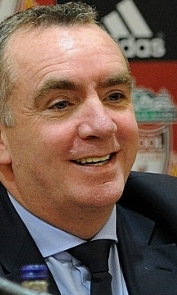 Comolli: January work has paid off

Ian Ayre has hailed Kenny Dalglish's appointment as Liverpool's permanent manager as a 'landmark day' and praised the Scot for restoring the belief within every corner of the club.

The Managing Director spoke glowingly about the boss during a packed Melwood press conference in which he reiterated his view that everything is now falling into place for the Reds to move towards a bright future.

Ayre told reporters: "It's a landmark day. I think the big day was back in January but making it permanent just cements what we have all been waiting for. I'm most pleased for the fans because having the support we have, giving them belief back and giving them Kenny is a great thing for everyone connected with the club."

He added: "When we made the appointment at the time, Kenny said himself that he was happy to come and help out until the end of the season.

"That helped everyone to settle things down and that's exactly what happened. I think we've seen a turnaround in fortunes on the pitch but we've also seen something else that came back as well as Kenny - and that is belief.

"Our fans and everybody around the club started to believe again and once you see that belief, then as Damien (Comolli) said, it was a no-brainer.

"Then it was just a process and as we said at the time, we would always keep it professional and private - and that was what we did.

"We had several meetings, pulled the agreements with Kenny and Steve (Clarke) together and here we are today.

"So it was never a case of consideration, more that it was evolutionary over the period and we are very happy with the result."

Ayre was also quizzed about the club's strategy for the future and the impact Fenway Sports Group have had since taking control of the Reds in October last year.

He said: "I think John (Henry) put it best on the day that they bought the club. He said we want to win. Winning means a lot of things but you only win if you have unity, if you are a team and if you support each other.

"One of the great things for all of us sat at this table is that we have the complete support of the guys who own this football club and we have the absolute support and commitment of our fans.

"All of those things will hopefully put us on the path to winning again."

He added: "It's amazing how engaged they are with football and Liverpool in such a short period of time. John (Henry) said to me the other week that he can't stop watching football matches, whether it's Liverpool or anyone else.

"Again, if you are going to buy a football club what a great one to buy. Look at the atmosphere and the great set of fans. An example was Harry Redknapp talking after Tottenham's game at Manchester City the other day.

"He spoke about Sunday's game and said it (Anfield) is a great place to play football, with some of the best fans in the world, with one of the best atmosphere's in the world. If you've bought into this club like the owners have, they feel that. When it's your team and you are winning I'm sure that gives them a great feeling and you see that when they are here.

"We came through a very difficult period but when you start to close the doors and deal with the business in-house, you get a lot more sorted out than if it's in the media or other areas. Equally when you break down political angles and egos that have existed here in the past at certain times and at other football clubs and other businesses; the one thing I could see that is testament to everyone here is that there aren't any egos here. It's all about Liverpool Football Club and that's the way it should be."

Asked for an update on whether the club would build a new stadium or redevelop Anfield, Ayre added: "It's the same as we have always said on that subject. We need to take the time to understand what the real opportunities are for both of those.

"One of the things that people have been really critical of the club about over the past few years was making rash statements and then not living up to them.

"We've seen from day one with Tom (Werner) and John that they do things in a measured way and they expect us to do the same. Just like questions being asked about today's announcement for the last few months, the same questions are being asked about the stadium. As and when we know the answers, we will tell everybody. We are very committed to finding the right answer.

"The dictation on the stadium will be about finding the right financial model. We are very fortunate that Champions League or no Champions League, we fill our stadium. That's what will dictate our ability to build a new stadium or refurbish Anfield.

"It's not dependent upon that (Champions League). We'd all like to see it but that's not part of the decision making on the stadium."

Ayre on stadium, contracts and FFP