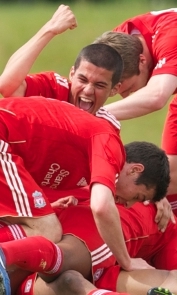 Frank McParland has today saluted the crop of talent emerging from the club's Academy.

Six players from Liverpool's youth base have been named alongside Jonjo Shelvey in England U19s latest squad - following hot on the heels of the quartet that were originally involved with the U17s at the European Championships.

It is further evidence of the depth of quality now being nurtured in Kirkby - and the Academy director feels the news caps a very productive campaign for his staff and players.

"We've had four players called up for England U17s and we've just had news about the six that have been called up for the U19s," McParland told Liverpoolfc.tv.

"Add that to the two lads who have been involved with the first-team for the past four or five games and it's all very positive.

"Okay our U18s didn't win the league and it was disappointing for us. But I think the coaches realise that getting the players into the first-team set-up is the most important thing and we've made some great progress.

"It's testament to the hard work everyone is doing here."