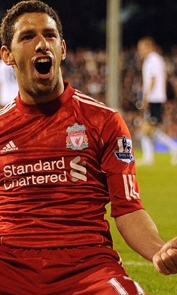 Another Maxi Rodriguez hat-trick helped Liverpool climb back into a European spot with a 5-2 win over Fulham at Craven Cottage.

The Argentine bagged his second treble in two weeks after opening the scoring in the first minute, with Dirk Kuyt and the irrepressible Luis Suarez also getting in on the act during a superlative exhibition of football.

Mousa Dembele and Steve Sidwell snatched consolations in the second period to deny Jamie Carragher a clean sheet on a day when he climbed to outright second in the club's appearance table having worn Liverpool colours an incredible 666 times.

The result means he and his teammates are now two points clear of rivals-for-fifth Tottenham having played a game more. The sides meet at Anfield on Sunday.

With Andy Carroll not fit enough to participate, Kenny Dalglish opted to photocopy his teamsheet from the 3-0 victory over Newcastle.

And Fulham were to suffer a similar fate to the Magpies by conceding an early goal to Maxi - this time after just 32 seconds. It was Lucas who drove the ball through Fulham's rearguard for Suarez to run onto. His cross then ricocheted off Carlos Salcido before Maxi hammered into the net.

But we hadn't seen anything yet. On seven minutes it was 2-0 as another Lucas pass split the home defence. On this occasion Glen Johnson received possession before floating a cross to the back post where Maxi was waiting to execute a first-time volley into the bottom corner.

Click the image below to watch highlights and analysis 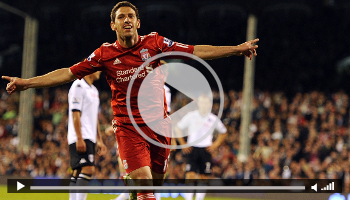 There was no let-up from the visitors, who were working together like ants who'd stumbled across a stray Wotsit.

On 16 minutes the game threatened to become a sporting massacre when a simple ball from Johnson evaded the defence before Kuyt smashed through the arms of the hapless Mark Schwarzer.

Suarez attempted a spectacular fourth after turning Brede Hangeland but failed to display any of the precision previously witnessed.

Next a brilliant throw from Pepe Reina set Suarez on his way. The centre came to Maxi, whose volley winged into the stands.

Fulham were as organised as a chessboard after an earthquake but you could not take anything away from a Liverpool side rolling back the years to Dalglish's first reign in charge.

But what was this? A shot from the Cottagers, Clint Dempsey angling his foot to meet a Simon Davies corner only for Johnson to divert the ball to safety from the goal line.

There was some bad news for Liverpool three minutes into the second period as Raul Meireles left the field clutching the back of his thigh, with Jonjo Shelvey stripping down.

Dempsey tried to capitalise on the reshuffle with a shot from 20 yards but Reina watched it fly over the woodwork.

Fulham were at last starting to play like a side unbeaten at home in the league this year.

And they got their reward on 57 minutes when substitute Bobby Zamora slid the ball to Dembele, who curled beyond Reina from just inside the box.

Zamora then had a header cleared off the line and suddenly there was a buzz on this stretch of the Thames.

But the fight-back was curtailed on 70 minutes when that man Maxi stole possession midway inside the Fulham half before lashing into the top corner from 25 yards. It was now seven goals in three games for the 30-year-old.

Shelvey then set Suarez up for a fifth on 75 minutes, threading the ball between two defenders before the January signing rounded Schwarzer and tapped into an empty net.

Sidwell whacked another consolation on 86 minutes from a similar distance to Maxi's third, while both Shelvey and Spearing were denied late goals by Schwarzer and Salcido respectively.