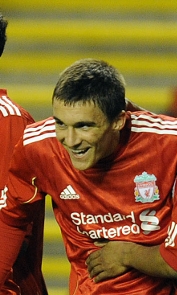 It's been an exciting season at reserve and youth levels for Liverpool - but which players have stood out for you?

As 2010-11 draws towards its conclusion, we want to know which starlets you feel have been the best performers during the campaign.

Simply click the link below to vote for your Reserves and Academy U18s Player of the Season.

Our poll asking for you to decide the first-team's Standard Chartered LFC Player of the Season also remains open for you to cast your vote.