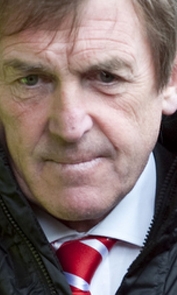 Kenny Dalglish has today spoken of his sadness following the death of golf legend Seve Ballesteros.

The 54-year-old won five major titles during a glittering career - but passed away on Saturday after a brave battle against cancer.

On hearing the news Dalglish said: "Seve had everything you wanted in a sporting champion: he was talented, charismatic, entertaining and, above all, fearless.

"What impressed me was that he never ever shirked a shot. If something was there, he would try it. He wasn't afraid to be creative or inventive.

"And, of course, he had the ability to pull it off. He must have had unbelievable coordination for some of the shots he did.

"I'm a keen golfer and Seve was the best recruitment agent the sport ever had. He introduced so many to golf because of his flamboyance.

"He wouldn't win every week but he was a multiple major champion and, win or lose, you couldn't take your eyes off him.

"His most enduring legacy will probably be the passion and commitment he gave to the Ryder Cup.

"To hear of Seve's death at 54 is very sad, he deserved a better scorecard than that. But the contribution he made to sport, let alone golf, is immeasurable."