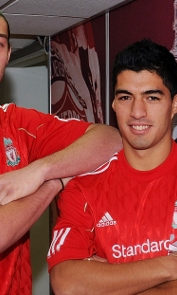 Mark Hughes believes Liverpool can be proud of their January transfer window business when they recruited both Luis Suarez and Andy Carroll to replace Fernando Torres.

Hughes' Fulham side host the Reds at Craven Cottage on Monday night and he admits they will be coming up against an in-form team - and against two front men who can go on to enjoy a successful career at Anfield.

"I think the view is that they've done good business in terms of the two players they've got in with the money they've got for Torres," said the Fulham boss.

"Given the way it's panned out for Fernando Torres, you'd argue at this moment in time it's the better deal, only because the two guys that have gone in at Liverpool seem to have very quickly struck up a partnership and that seems to be working well for Liverpool.

"Right through the history of football, there's great partnerships and there's always examples of where one player triggers off the good, positive parts of another player.

"And there's signs that there's the possibility Carroll and Suarez will obviously continue in the same vein and be a very strong partnership for Liverpool for years to come."

As well as singing the praises of the Reds' strikers, Hughes also insists manager Kenny Dalglish deserves credit for leading the Club towards the brink of a European place.

"From the outside looking in, I think it seems that they're a group that are playing with a smile on their faces, they seem to be enjoying their work - for whatever reason.

"It's probably the personality of the manager, I would suggest, because he always played with a smile on his face.

"At times, he'd moan and groan as a player. But, certainly, when you see him with a big smile, that filters through to the group he's working with, I'm sure.

"They seem to be enjoying what is presented in front of them and they're responding to Kenny at the moment and getting good results as a consequence.

"It'll be a difficult challenge for us but, from our point of view, we could say exactly the same.

"We went to Anfield early in Kenny's tenure and played exceptionally well. We were beaten on the day but we were extremely disappointed that we didn't get anything out of that game.

"If we play as well as we did on that day then we'll go close. But we would argue that we have the potential to play even better, given that we're the home side this time."