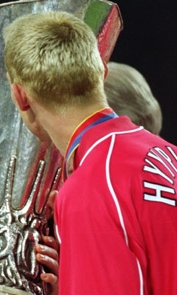 The events of January this year mean that the views of Fernando Torres carry far less weight than they once did in these parts.

But, regardless of who his current employers may or may not be, there were still times in the past when he managed to speak for everyone and his opinion of Sami Hyypia is a case in point.

"Hyypia is without doubt the best team mate I have ever had," Torres once said. "Ten out of ten as a player and as a person. Everyone loves him. He never complains, he never sulks, you never hear a word out of place from him. I really admire him. In training sessions when we do crossing and finishing exercises 90% of his shots go in. I started calling him the Matador in Spanish; now he calls me it. I told him he had to play his last season as a professional up front because he never misses."

Sadly, Hyypia revealed at the start of the week that this is his last season as a professional and he will hang up his boots when the campaign comes to an end. Tributes have poured in and rightly so because, as Torres pointed out, big Sami is one of the most respected figures in modern football and his standing in the game transcends club rivalry. An ultimate professional in the truest sense, you would be hard pressed to find anyone who has a bad word about him and there are not many who have played at the highest level for the length of time that Hyypia has who can say that.

"In every single training session and in every single game he gives 100 per cent for the team and he has been a fantastic servant to this club," Rafael Benitez said prior to Hyppia's departure from Liverpool to take up a new challenge with Bayer Leverkusen. "He is always keen to help the youngsters and he sets them a really good example. He is a perfect professional."

Jamie Carragher, who partnered Hyypia in central defence for several seasons, is better placed than most to assess the Finn's value to Liverpool and his tribute was equally fulsome. "I don't think you could use any other word for Sami than legend," Carragher said. "If you look at the standard of his performances ever since he came to the club, his level of consistency then you would have to say he is up there with the very best centre backs we have ever had.
"And when you take into account his transfer fee you'd have to say pound for pound he is one of the club's greatest ever signings. He is definitely one of the best foreign players to play in the Premier League and he is arguably Liverpool's best ever foreign signing."

Such is the level of respect that Hyypia is held in by everyone who has been associated with Liverpool in the last decade it would be possible to go on and on, listing eulogy after eulogy in his honour. His football achievements are there for all to see and his ability as a player will linger in the memory long after his retirement but what set Hyypia apart more than anything else were his qualities as a human being.

During his final season at Anfield, Hyypia cemented his place in our hearts with a magnificent gesture that spoke volumes for his character. Listening to local radio station City FM, he heard an appeal to raise funds for a local children's hospital in a manner that told us all we needed to know about him. With the charity drive looking to raise £50,000 for a playroom at Arrowe Park Hospital, Hyypia called in and pledged to make up the shortfall if donations from listeners did not reach that figure. The shortfall turned out to be £23,000 but Hyypia was as good as his word, paying that amount in full because he "wanted to make some contribution to allow this facility to be built."

There will be those who will suggest that top level professional footballers are paid handsomely enough to make such gestures but that would be to miss the point altogether. There are scores of millionaires in the Merseyside area who could have made that gesture but none of them did. Equally, high profile sportsmen are never short of requests for charitable help and while many of them are more than happy to provide it, few do it as instantaneously and without prompting as Hyypia did on that occasion.

My own abiding memory of Hyypia came in the days leading up to his final appearance in a Liverpool shirt. Being fortunate enough to be offered the chance to interview him for the Liverpool Echo, I arrived at Melwood on the Thursday morning before his last game at home to Tottenham Hotspur and spent the best part of half an hour discussing the career highs and lows of a soon to be former player.

As usual, Hyypia was honest and forthright, his respect for the club he was leaving as evident as the emotion that he was doing so. But it was when the interview came to an end that I realized just what Liverpool meant to him. I thanked him for his time, wished him luck for the future and then expressed my gratitude for everything he had done for the club. Hyypia didn't buy into the latter, though, for him it was the club that had done everything for him and he just felt fortunate to have been a part of it for as long as he had. But as he went on to talk about his affection for the fans, his eyes began to fill up. In a hard bitten industry like football, people don't reveal their emotions too often but here was one of the game's finest exponents showing exactly how much Liverpool Football Club and its fans meant to him.

I can't say anything that will add to what has already said about Sami Hyypia by those who knew him best - his former team mates and managers. But what I can say is that I don't think Liverpool have ever had a player who was more proud to play for the club. He may hail from Porvoo in Finland but inside his giant frame there was most definitely a Scouse heartbeat. His retirement is a loss for football, the game he graced with such distinction and class, but his standing on Merseyside is secure forever and his sheer humanity will be remembered long after his boots have been hung up.