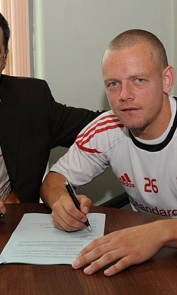 Director of Football Damien Comolli today paid tribute to the work being carried out at Liverpool's Academy following the emergence of two more youngsters into the Club's first team plans.

In the week Jay Spearing - another who graduated through the Academy ranks - put pen to paper on a new Liverpool contract, Comolli admitted the progress of Spearing as well as John Flanagan and Jack Robinson has filled him with great optimism for the future.

"The fact that Jay has been given a new contract shows that if you do well then you will get chances to play and get another contract," he said. "It's not that if you come from other clubs then you are more highly regarded. To me it is the same.

Click on the image below to watch our chat with Damien 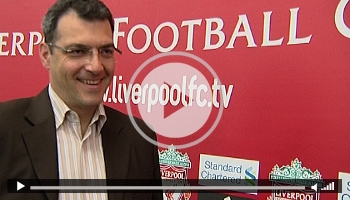 "It's fantastic for the identity of the club to have so many local players. Stevie and Carra have been here for a long time and now we have Jay, and also Jack Robinson and John Flanagan.

"Having local players gives the club a strong identity and also keeps the family atmosphere around the place. These players have been here for so long that they make sure the atmosphere is still alive. It's great.

"The day we played Birmingham a couple of weeks back we had more players who had come through our Academy in our squad than any other Premier League side that day. That is a strong sign of the work going on at our Academy.

"It's fantastically rewarding for the Academy staff to see the work they have done over the past couple of years paying off. It also shows if you are good enough then you will play no matter what your age is.

"Jay has had a lot of games of late and hopefully John Flanagan and Jack Robinson can now do the same."