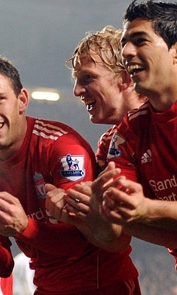 Pacheco signs off in style

Fulham fan and the Daily Telegraph's online Olympics Editor Nick Pearce provides the view from Craven Cottage ahead of Liverpool's trip to London.

How are Fulham fans feeling about our visit?

Both sides are enjoying something of a purple patch, with early season worries long forgotten. Our home form is excellent though so I'm very confident of a result. I think we all would have preferred to have hosted LFC without Suarez and Carroll on your books though.

You've got nothing to play for really, have you?

I don't really agree that we've got nothing to play for. If Fulham get maximum points from their last three games then it will be our highest ever points total in the league. While qualification to the Europa League - a tournament we're very fond of in South-West London - is a very real prospect via the Fair Play. Finishing as high as possible can only help us. As for results? Three out of our last five games have been 3-0 wins!

How would you assess your season?

I must admit that at the beginning of the Mark Hughes era I was incredibly sceptical about the club. Too many tedious draws in games we should have won. And we've only just been able to say 'we're safe'. The low would definitely be the 3-1 home defeat to West Ham on Boxing Day - a video nasty from my dad's telly in the West Country. No spirit and no answer - that's when my calls for Hughes' head were at their loudest. The high for me was the 4-0 FA Cup win over Spurs. We played to the best of our abilities and stuffed a noisy London rival in the process - perfect.

You been enjoying the Jacko statue?

Yeah definitely. I'm not a fan of the man but I like the quirkiness of it all. Have a sense of humour and enjoy it! I also go running past the ground a lot and it always makes me chuckle when I see it. It's also brought a lot of sight-seers to the ground and maybe they'll check out a match so they can get a closer look?

Can you recommend somewhere for LFC fans to get a drink or something to eat before the game?

I believe the 'Eight Bells' right by Putney Bridge tube station is run by a Red. In fact I know it is - I've watched an MUFC game and heard the banter!

I think every Fulham fan feels safe when they see Brede Hangeland's name on the teamsheet. He loves to pass it out from the back, in fitting with our style, and he's a rock in defence capable of chipping in with the odd goal. Clint Dempsey has just become our leading Premier League scorer too so when he's on the field at the Cottage you know we'll threaten the away side's goal.

Who do you rate on our side?

I mentioned them earlier but Luis Suarez and Andy Carroll are top-class strikers. Our last three games against Sunderland, Bolton and Wolves has not been especially challenging for our defence but Monday will be a completely different kettle of fish. Elsewhere Lucas and Meireles have done a great job in galvanising your midfield.

We are prone to occasional lapses in defence - and we really can't afford that against Liverpool. And we are probably a bit guilty of being too reliant on a small group of players for goals.

Best and worst memories of playing us at your place?

My best memory would have to be in 2002 when Facundo Sava - he of the Zorro mask celebration - scored a brace and we won 3-2. His celebration was class and it was one of our first proper Premier League scalps. Worst memory? Take your pick - but the 4-2 defeat in '04 having been 2-0 up at half-time is probably the worst.

I'm feeling confident about this one. 2-1 Fulham.