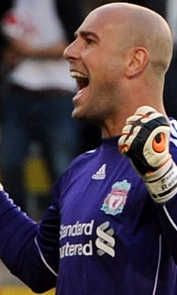 Kenny Dalglish has reiterated his belief that Pepe Reina is the best goalkeeper in the world as the Spaniard prepares to clock up another landmark at Fulham on Monday night.

The stopper will make his 150th consecutive league appearance for the club against the Cottagers - the seventh longest sequence in Liverpool history.

Dalglish believes it is a significant milestone for the No.25, claiming that he is the finest exponent of his position in the business.

Dalglish told Liverpoolfc.tv: "It's fantastic for Pepe. It's great for him to make 150 consecutive appearances. He's our goalkeeper and it's important we have that continuity. The quality of his performances have been fantastic. I'm sure it's a milestone that he will think about very fondly.

"He's a huge influence on us. Not only does he stop goals - he creates them as well. It's great for us to have him between the sticks, and for me - if he's not the best - then I would like to see the one that is better than him."

The Reds go in search of a win that would bolster their hopes of clinching a top five spot at Fulham - a game in which Dirk Kuyt will attempt to become the first Liverpool player to score in five successive league matches in the same season since the inauguration of the Barclays Premier League.

The last player to achieve the feat was John Aldridge back in March 1989 and the boss admits he would love to see the Dutch star continue his recent hot streak.

Dalglish added: "It would be fantastic for Dirk. I think Aldo was the last player to do it for us many years ago before the Premier League started.

"If Dirk can emulate that then that would be great. He's in a fantastic run of form. A few have been from penalty kicks but it takes a brave man to step up and take them. He's slotted them away too, so if he goes on to do that, it certainly wouldn't be a problem for us."