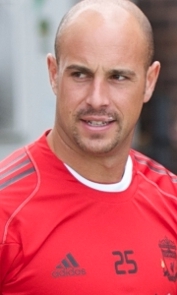 Pepe Reina could play his 150th consecutive Barclays Premier League game for Liverpool at Fulham on Monday night - here are all the rest of the big-match stats.

Should he achieve the feat, it will be seventh longest sequence by any player in Reds history.

The last match Reina missed was the club's final Premier League game before the 2007 Champions League final at home to Charlton.

Liverpool aim for a league double over Fulham this season following a 1-0 win over the Cottagers at Anfield back in January. John Pantsil scored a 52nd minute own goal to give the Reds a first home win since Kenny Dalglish returned to the managerial hot-seat.

Last season Liverpool lost 3-1 at Craven Cottage with Bobby Zamora, Erik Nevland and Clint Dempsey scoring the goals. Fernando Torres had equalised for the Reds. For only the fifth time in their history Liverpool had two players sent off in a game - Jamie Carragher and Philipp Degen within three minutes close to the end.

Overall in the Premier League Liverpool have won five and lost four at Fulham, while home and away have won 11 and drawn four of the 19 meetings.

Liverpool's biggest win over Fulham in the League came in November 1955 when they won 7-0 at Anfield.

Their best win on this ground came in October 2004 when they won 4-2 after being two goals adrift at half-time.

There has not been a draw between the teams at Fulham in the Premier League.

The 3-1 defeat at Fulham last season equalled Liverpool's heaviest ever loss at Craven Cottage - they lost by the same score in April 1956.

Billy Liddell, with the help of two penalties, is the scorer of Liverpool's only hat-trick in meetings between the sides doing so in September 1954 at Anfield.

Jamie Carragher will be in line to play his 666th game for Liverpool - moving into outright second place in the club's all-time appearance list.

Dirk Kuyt has now scored eight penalties out of eight for Liverpool as well as a successful spot-kick in a Champions League Semi-Final shoot-out against Chelsea.

Should Kuyt score he will become the first Liverpool player since John Aldridge in March 1989 to score in five successive league games in the same season.

Going into this weekend's games no Premier League player has achieved that feat though Peter Odemwingie had also netted in 4 in a row prior to West Brom's game with Wolves.

Steven Gerrard will be missing for the seventh successive league game. The Reds have won four and drawn one of the six games. He has made 21 league appearances this season, the fewest since he became a regular in the team in 1999-2000.

If Liverpool win all their remaining three games they will reach a total of 64 points - one more than last season.

A Reds' victory will equal last season's total of five league wins away from home.

Liverpool have scored in each of the last 15 league games home and away.

On the road the Reds have won one of the last six games in league and cup.

They have not conceded a goal from open play in the last four games - the only one scored in that time coming from a Robin van Persie penalty at the Emirates.

The only Fulham player to score a hat-trick against Liverpool is Roy Dwight who did so in 1956.

The three goals Fulham scored in this fixture last season are the only goals scored by them in the last seven meetings home and away.

They have netted only four goals in the last nine clashes with Liverpool.

The Cottagers are looking to record back-to-back home league wins over Liverpool for only the second time ever.

Fulham are unbeaten in the last seven home league games with six wins and a draw. They last lost at home on Boxing Day when they went down 3-1 to West Ham.

Only Blackburn of the last seven visiting teams to Craven Cottage have scored (they lost 3-2).

Fulham have scored three times in each of the last three home league games - beating Bolton, Blackpool and Blackburn.

The only teams to leave Craven Cottage with all three points are Tottenham, Manchester City and West Ham, while Manchester United and Chelsea have both only managed draws.

They are unbeaten in the last three games since losing at Old Trafford and have lost only two of the last 11 Premier League fixtures.

They are looking to record a third successive league win for the first time since May 2008 when those victories kept them up (winning at Portsmouth on the final day of the campaign).

If they win this game it will be first time since February 2006 they have won four in a row at home in the Premier League.

Clint Dempsey has now scored a record 33 Premier League goals for Fulham. His first goal came against the Reds in May 2007 after coming on as a substitute.

Illness ruled Brede Hangeland out of last weekend's 3-0 win at Sunderland - the first league game he has missed this season.

His replacement Philippe Senderos was making his Fulham debut following his summer signing from Arsenal. He had missed virtually the whole of the campaign with an Achilles injury.

Fulham are the only team in the top-flight not to have had a player red carded this season.

Fulham have won eight of the 47 League games between the two sides.

Mark Hughes is Fulham's 25th post-war manager and their sixth since 2000.