KD: Why starlets are still winners

There was frustration for Academy trio Adam Morgan, Raheem Sterling and Brad Smith as England lost 2-0 to Denmark in the European U17 Championships on Tuesday afternoon.

Sterling made his first start for John Peacock's side in the tournament but was forced off the field after 38 minutes when he picked up a slight knock.

Left-back Smith played the full 90 minutes while Morgan came off the bench after 65 minutes to make his tournament bow.

Two goals in the first half from Viktor Fischer and Kenneth Zohore arned the victory for the Danes.

The result now means England have to beat host nation Serbia on Monday to keep their hopes alive of defending their U17 Euro crown. 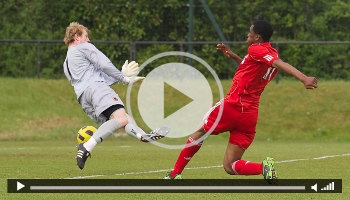