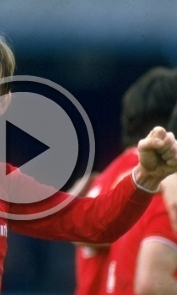 It was 25 years ago today on May 3, 1986, that player-manager Kenny Dalglish scored the goal against Chelsea that gave Liverpool the league title. Watch the memorable strike now online.

The sublime volley at Stamford Bridge gave the Reds the three points they needed to win the league, and it also paved the way to win the double with the FA Cup final v Everton at Wembley next on the agenda.

'King Kenny' became the club's first ever player-manager to lead his side to the league and FA Cup double.

Click on the play button below to watch Kenny's title decider