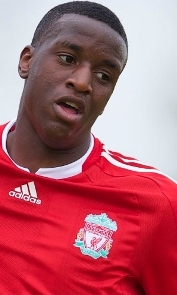 Yeats: Sami reminded me of myself

Liverpool U18s are just one win away from the Premier Academy League Group C title following a 4-0 success at Wolves on Tuesday afternoon.

An early strike from Toni Silva and a second-half hat-trick from substitute Michael Ngoo did the damage as the Reds moved to within two points of leaders Everton.

The result means that a victory in the return clash at home to Wolves on Friday will clinch top spot and a place in the play-offs.

The Reds went into the contest in the knowledge that anything other than three points would end their title hopes, but any nerves they may have felt in the pre-match build-up were immediately settled when they got off to the perfect start on three minutes.

Adam Hajdu broke up the play deep in Wolves territory and fed Krisztian Adorjan 20 yards from goal. The Hungarian was thwarted by a defender's touch but when the ball ran free, Silva was on hand to drill an exquisite shot into the far corner.

It gave the visitors the platform they needed and Kristjan Emilsson almost doubled the advantage on 12 minutes but he slipped at the vital moment.

The Icelandic frontman was in again just 60 seconds later but this time his low effort was easily claimed by the Wolves stopper.

The hosts had rarely threatened but as the half wore on they began to create opportunities and Sam Whittle's header off the bar was the closest they came to restoring parity.

Liverpool continued to look dangerous on the counter attack and after Silva saw his rasping shot blocked Henoc Mukendi could only watch on in frustration as a close range flick was well claimed by the 'keeper.

It had developed into a keenly contested match but the half-time introduction of Ngoo helped to restore the away team's dominance.

With a two-goal cushion to protect the visitors began to drop back allowing Wolves the opportunity to gain a foothold in the game.

John Gorman went close with a well-struck shot from distance while Tyrell Belford had to be alert to tip Liam McAlindon's header over the bar.

The hosts' desire to get back into the contest inevitably led to opportunities on the break for Liverpool and after Adorjan and Ngoo both went close they finally sealed the points when the Hungarian's trademark pass was clinically converted by the former Southend striker.

Hajdu was then denied a goal that would have capped a fine individual display before Ngoo clinched his hat-trick deep into injury-time with a shot that the 'keeper could only parry into the corner of the net.