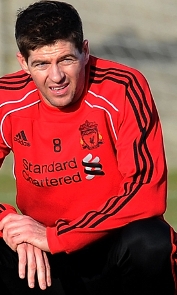 Who was our best player?

Steven Gerrard is confident of returning to the field in time for pre-season.

The skipper, who underwent groin surgery in March, admits not playing is painful.

"For the first time in a while, I'm feeling confident about my groin," the skipper wrote in his programme notes ahead of Liverpool's 3-0 win over Newcastle.

"But being injured is killing me. The manager and everyone else do their best to make you feel part of it. But, unless you are out there starting every week, it doesn't quite feel the same.

"Fingers crossed, I'll be there on the first day of pre-season."

Gerrard last played for Liverpool on March 6 during the 3-1 victory over Manchester United.