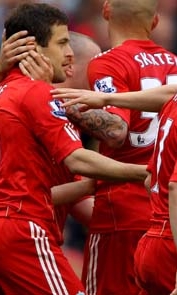 Cole has struggled to establish himself in the starting eleven since swapping Chelsea for Liverpool in the summer, but the boss insists the Reds' fifth goal in the rout of Alex McLeish's side could have a major bearing on the 29-year-old's future.

"It could be massive for him because he has not had as many opportunities as he would have liked as he's been injured and suspended.

"He's had a difficult time, but it is a great credit to him the way he has been training and working every single day.

"He's not let it affect him, and that's all I can ask for - for anyone when they do get their chance to go on and do their best. He is fantastic in training. He plays everything right and doesn't have a problem.

"Joe, like Maxi and others out of the team, are giving themselves the best opportunity because, in training, they are committed and determined.

"Everybody has to work hard to get anything and Joe is no different from anybody else. But he's done that, and has got his chance. It could be important for him."