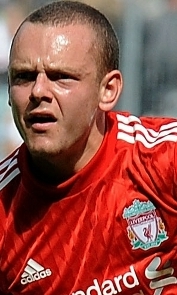 Jay Spearing insists Liverpool will continue to give it everything they have got in the race for a European spot.

Liverpool are three points behind Tottenham in the race for fifth, and despite Harry Redknapp's side having a game in hand they still have to play at Anfield.

Spurs travel to Chelsea on Saturday evening, but whatever the outcome of that game Spearing's only concern is another three points for the Reds when Kenny Dalglish's former club Newcastle United arrive at Anfield on Sunday.

"We can't look too far ahead, we have Newcastle this weekend and we need to get three points and keep the pressure on Tottenham," said Spearing.

"We can't keep worrying about what other people are doing in the league, we have to keep working.

"The club seems on a high at the moment and we are keeping it going by putting in good performances.

"We have been doing a lot of work together and it is starting to pay off in games.

"The confidence which Kenny gives everyone bounces back to him and anyone who comes in (to the team) gels straight away and the training we are doing every day is showing on the pitch.

"We are working hard for one another and the good thing is as soon as we lose the ball we are fighting to get it back again and it is that desire in the side now that we want to keep going until the end of the season and finish on a high."

The Wirral-born midfielder is enjoying his football under Dalglish and he is grateful for the chance he has been given to show what he can do at the highest level.

"For a lot of us, including myself, it is a chance for us to get a step in and show people what we are capable of doing," he added.

"For me it is about putting pressure on the likes of Stevie G and for Jack and Flanno it is to put pressure on people like Glen Johnson so you can see there is a fight for places."