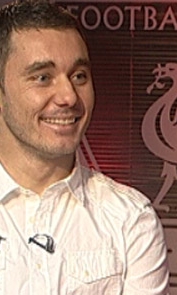 Who was April's star man?

Fabio Aurelio is hoping to return from injury before the end of the season and help Liverpool in their quest to reach Europe.

The Brazilian is currently sidelined with a hamstring injury sustained during the 1-1 draw at Arsenal, but remains  optimistic he can make a comeback soon.

"I'm optimistic I will be able to play again before the end of the season," said Aurelio.

"It's the same hamstring injury I had against Manchester United in March but in a slightly different place.

"It is very frustrating but the way I look at it is God is good all the time and I still have faith that things will turn around.

"That is why I keep fighting to get fit."

In the absence of Aurelio, Glen Johnson and Martin Kelly, Academy graduates John Flanagan and Jack Robinson have been given their chance by Kenny Dalglish, and Liverpool's No.6 has been suitably impressed.

"I didn't see the rest of the first half at Arsenal as I was inside being treated but I saw most of the second and Jack looked very confident," he added.

"He showed his ability, quality and personality. It was the same with John Flanagan.

"They are very young but they didn't seem to feel the pressure at all."