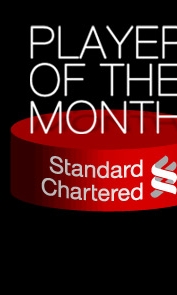 Liverpool have kept up the fight for a European place with some superb displays during the month of April - but which player stood out for you? It's time for you to vote for your Standard Chartered Player of the Month.

It was a calendar month that saw Andy Carroll register his first goals in a red shirt, Maxi nettting his first hat-trick for the club and youngsters like Jay Spearing, John Flanagan and Jack Robinson earning plaudits.

Dirk Kuyt was also on the mark with strikes against Manchester City, Arsenal and Birmingham City while Lucas enjoyed an influential April in the middle of the park.

We want to know which player has stood out for you?

As ever, the choice is yours, so make your selection from the options below.