Gary McAllister says 'all the signs are encouraging' on the health of former Liverpool manager Gerard Houllier.

The Frenchman was admitted to hospital on Wednesday with chest pains, meaning Gary Mac stood in as Aston Villa boss for their 1-1 draw with Stoke yesterday.

But McAllister said: "A few of the staff went to see Gerard this morning. I saw him last night and a couple of times yesterday. 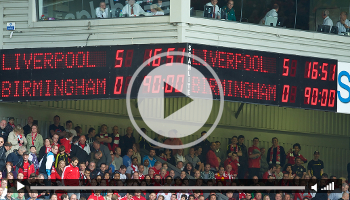 "I spoke to him before the kick-off and his main concern as always was the players. He wants them to do well.

"I'm going to go up to the hospital now.

"All the signs are encouraging. He has got a bit of colour in his cheeks and he doesn't look like a guy who has had a tough couple of days."

Houllier's name was sung at Anfield yesterday, while Kenny Dalglish has also sent his best wishes to the treble-winning coach.

During his time at Liverpool Houllier underwent life-saving 11-hour heart surgery to repair an aortic dissection, which resulted in a five-month absence from the dug-out.

McAllister: Reds have to trust themselves

McAllister: Why Liverpool-Leeds is such a great fixture

#LFCWORLD: Gary Mac and THAT goal...

McAllister: Adam deserves all the credit