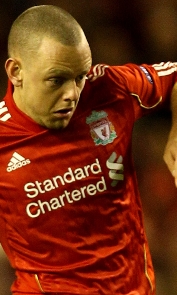 He may have won the man-of-the-match accolade at Arsenal last weekend, but that will count for nothing for Jay Spearing when he steps out against Birmingham City this afternoon.

The 22-year-old is enjoying his longest run in the Liverpool first team plans since graduating from the Academy, and is justifying the faith placed in him by Kenny Dalglish with a series of top class performances in the Reds' midfield.

But far from basking in the successes he has enjoyed over the past few weeks, Spearing insists he's only interested in looking to the future.

"Every single time I get on that pitch I have to prove I deserve to start the next game," he said.

"You could say it's pressure but it's something I thrive on. I have to show everyone what I'm capable of.

"My dad is the first one to congratulate me when I've played well but he's also one of my main critics. He says to me that I'm only as good as my last game and that's exactly what I go into every game thinking. Every game that comes along, I have to be better and better.

"As soon as one game goes, I can't dwell on whether I've played well or not. I have to look at Birmingham on Saturday and think I can play well again.

"I have had to be patient for two or three years now and different managers have given me different opportunities. I used to come in and then be out the next week.

"But I knew that if I kept grafting and kept showing that I wanted it that one day it would come for me.

"Alonso and Mascherano dominated the midfield over a couple of years. I was battling on in the background and learning from them. With them going, I did think this was my chance to come in and maybe prove what I was capable of doing.

"Stevie G is someone I've got to try and compete against every day. With him being injured it has given me a chance to come in.

"I always dreamed of playing for Liverpool. I want to get more and more games and become a regular in the side."

Spearing may have picked up the champagne after last weekend's 1-1 draw at Arsenal, but only minutes earlier he was praying for the ground to open up and swallow him after conceding an injury-time penalty which seemed set to hand all three points to the Gunners.

"I tried to win the ball but it was a silly challenge to make," he said. "I just wanted to dig a hole and hide in it but I had to get on with it.

"There was no point dwelling on it and the team showed the togetherness we have by fighting back and taking a point. It was one of the greatest things ever when Dirk slotted it.

"It was a massive boost for me to be declared the man of the match."

If selected this afternoon it willl be the first time Spearing has ever started two successive league game for the Reds - and he admits he owes a huge debt of gratitude to the man who has united the club since stepping into the managerial hot-seat in January.

"I was maybe a little bit too young to see what Kenny did for the club during his playing days but just hearing about everything he did for the club, seeing on television what he was capable of and just seeing his presence around the club now means I'm able to appreciate it," he said.

"He started in five-a-side when he first came. I tried to kick him but he's still too quick for everyone!

"The place has been buzzing since Kenny came in. He has given us all a lot of confidence and brought the team together. That showed on Sunday when we went behind so late on but we stuck together and showed fight and desire.

"I have to thank him for what he's done for me and particularly for the chances he's given me."

Listen to all 90 minutes of Liverpool v Birmingham today live on LFC TV Online. Click here to sign up now.