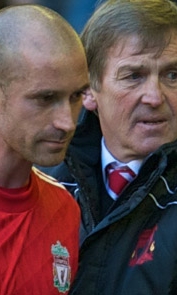 Raul Meireles has spoken about his admiration for Kenny Dalglish and how the manager has instilled a winning mentality in his players.

Liverpool's No.4 still believes an end of season European spot can be achieved and insists the squad will give it everything  that is possible to try and make that happen.

"It's a pleasure to play for Kenny. He is a fantastic manager and everybody loves him," Meireles told Liverpoolfc.tv.

"He knows a lot about football and it's great for me to work with Kenny.

"He has encouraged us to play good football and he has given us a belief that every time we go out on the pitch we can win."

Click on the image below to watch our chat with Raul

The Portugese ace believes Liverpool can now put the pressure on their challengers for a European spot by claiming maximum points out of their two back-to-back home games, starting with the visit of Birmingham City to Anfield on Saturday.

The Reds go into the clash with the Carling Cup winners five points behind fifth-placed Tottenham Hotspur.

"We still believe we can qualify for the Europa League and win every game between now and the end of the season," added Meireles.

"I know we are depending on the results of other teams but we just need to win every game.

"If we do our job well then I think we will have a good chance of qualifying."

Liverpool played out a 1-1 draw with Arsenal last time out, and Meireles feels the team can take a lot of heart from their display at the Emirates Stadium into their remaining games.

He said: "It was a crazy game at Arsenal and I've never been involved in anything like that before. When Dirk scored and then the final whistle went it was a fantastic feeling because we deserved something from it.

"It was great to celebrate with our fans at the end and it was so important we didn't lose that game because we can take a lot of confidence from our performance on the day."

Liverpool's No.4 made his debut for the Reds as a 76th minute substitute against Birmingham at St Andrews back in September - an encounter that ended goalless largely thanks to an inspired performance from Pepe Reina.

"That was my first game for Liverpool and it was a difficult game," he reflected.

"In the Premier League there are no easy games but we need to work hard and get the three points.

"We have two home games now and it's very important we keep winning, especially with us playing at Anfield, and we need to get maximum points from our next two games."

The former Porto ace also spoke about the instant impact Luis Suarez has made on Merseyside since his move from Ajax.

"I already knew about the qualities of Luis Suarez before he came here and it was brilliant that we signed him," Meireles said.

"He scored in his first game and has settled very quickly into the Premier League.

"He can be a big player for this club and in the future we will see a better Suarez, a better Andy Carroll and a better Raul Meireles I hope.

"We all want to improve and bring success to this club."