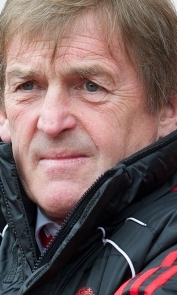 Kenny Dalglish is confident his Liverpool side can break a seven-year jinx on Saturday by beating Birmingham City in the league.

Rafael Benitez failed to gain three points against the midlanders during his Anfield tenure - while Roy Hodgson could only manage a goalless draw at St Andrew's earlier this season.

Emile Heskey, Steven Gerrard and Michael Owen were the scorers the last time we overcame Birmingham in a league match back in May 2004 - but Dalglish isn't concerning himself with history.

"The past doesn't matter," he told Liverpoolfc.tv. "It's what happens on Saturday that's going to determine the result. Obviously we'd love it to change and improve our record against them."

Liverpool would be third in the league if the season started when Dalglish re-took the reins in January - proof of the potential within the squad, according to the gaffer.

"It reflects on how well the players have done," he said. "Their approach has been fantastic since we came in and their determination to get results has been superb. It's a work in progress but there are quite positive signs.

"If you support Liverpool Football Club then I think you will have enjoyed what's gone on, but like Oliver Twist we'd still like to get a wee bit more."

Liverpool go into Saturday's 3pm kick-off on the back of a victory against Manchester City and a draw at the Emirates, results gained with several Academy graduates on the teamsheet.

Dalglish is keen to moderate the hype surrounding players such as 17-year-old Jack Robinson and 18-year-old John Flanagan, but he admits it's not easy with all the media coverage of football today.

"It's easy for us - though it might be difficult for the press," he said. "The lads find it quite easy. They're good lads and they're well grounded. I don't think we'll have a problem, and I don't think they'll get carried away.

"They can be immensely proud of the way they've played in the games they've been involved in but we won't get carried away.

"We've got some experienced heads and so have they at home - their parents and relatives. They'll be able to keep their feet on the ground.

"It's difficult for local lads to progress in football. Sometimes they're dragged from one thing to another but for these lads to have got as far as they have shows you they've got some determination. They also respect the profession they're in and what they have to do to be good at that profession. They are quite strong individuals."

One of the experienced heads at Dalglish's disposal is Steve Clarke.

Speaking to us earlier in the week, he revealed how the coaching staff go about keeping young players grounded.

"We keep on at them every day in training," he said. "When you come into work you can reflect a bit on the previous performance but in football the next game is always coming up. There is no point dwelling on what you've done - it's what you're going to do in the following game.

"They've got good people around them, they'll get good advice and they seem to me to be very level-headed boys. I'm sure they'll continue to progress."

Clarke and Dalglish will pit their wits against a man they know well this weekend in Blues boss Alex McLeish.

But our first-team coach isn't expecting any favours despite City having steered themselves clear of the drop zone in recent weeks.

"I know Alex through his time in Scotland, I think I played against him a few times," said Clarke. "He will have been coming to the end of his career as I was starting out in mine!

"I know him well and he's done a good job there. Winning the League Cup with Birmingham was a big thing. They've almost got enough points in the league but they're not quite in a position yet where they can relax and so it'll be a difficult game for us."

Dalglish on Klopp, Gerrard and 'Kenny'

Kenny and Raheem honoured at NWFA

'My telepathic link-up with Kenny explained'