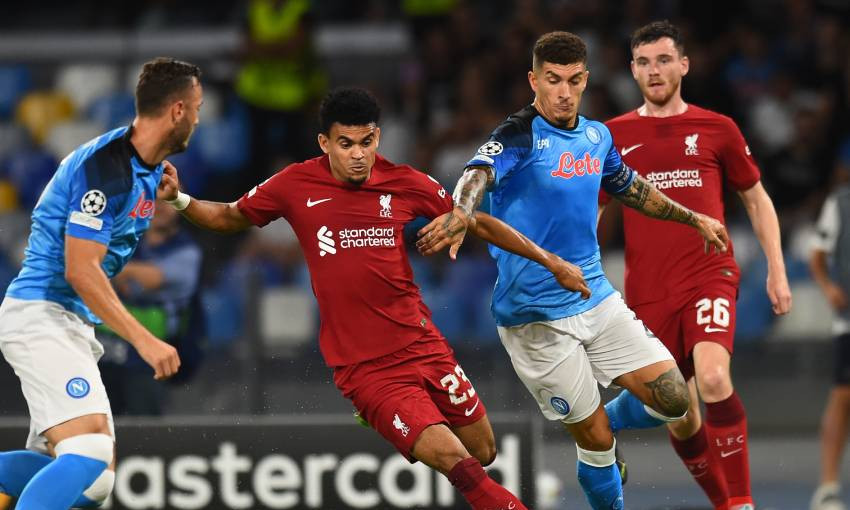 Liverpool fell to a 4-1 defeat by Napoli in their opening Champions League Group A fixture on Wednesday night.

The hosts won the contest at Stadio Diego Armando Maradona as Piotr Zielinski struck twice and Andre-Frank Zambo Anguissa and substitute Giovanni Simeone also got on the scoresheet.

Alisson Becker saved a first-half penalty from Victor Osimhen, while Luis Diaz struck a consolation in the second half for Jürgen Klopp’s men.

The Reds made three changes for the trip to Naples, with Andy Robertson, James Milner and Roberto Firmino all starting. Thiago Alcantara was back among the substitutes.

Napoli started the evening on the front foot and almost opened the scoring inside the first minute of the encounter.

Giovanni Di Lorenzo’s forward pass found Osimhen, who rounded the onrushing Alisson, but the striker could only hit the post from a tight angle.

The hosts did, though, have their lead in the fifth minute through Zielinski as he converted from the penalty spot after Milner was penalised for a handball.

At the opposite end, Joe Gomez saw a shot blocked following a free-kick before the home side won a second spot-kick of the evening ahead of the 20-minute mark.

Virgil van Dijk was adjudged to have taken down Osimhen by a VAR review, though the No.9 saw his resulting effort from 12 yards saved to Alisson’s right.

Trent Alexander-Arnold had a set-piece tipped over the bar in response while Van Dijk cleared off the line following another swift break from the home side.

Osimhen travelled into the box and squared a pass to Khvicha Kvaratskhelia but the centre-back retreated well to halt the effort.

Napoli did bag a second goal just two minutes later through Anguissa, who slid the ball in off the post at the next attack.

The hosts again added to the scoreline as half-time approached with substitute Simeone converting from close range.

Two goals were quickly exchanged following the change of ends, as Napoli first added a fourth through Zielinski.

Alisson produced a great low save, though was unable to prevent the attacker’s follow-up.

Diaz then struck for the Reds to grab a goal back for the visitors with a fine finish into the bottom corner of the net from the edge of the box.

The Colombian winger went close a short while later with a powerful header that forced Alex Meret into a reaction save.

The former saw his first real involvement bring a last-ditch block by the Napoli defence as Diaz attempted to capitalise on an error.

Luciano Spalletti’s outfit threatened again through Hirving Lozano but his low effort was dragged wide of the goal from outside the area.

New Reds midfielder Arthur Melo was also called from the bench for his debut late on following his arrival last week.

Jota attempted to finish off a slick forward move in the closing stages to add a second but failed to connect properly with the low ball.