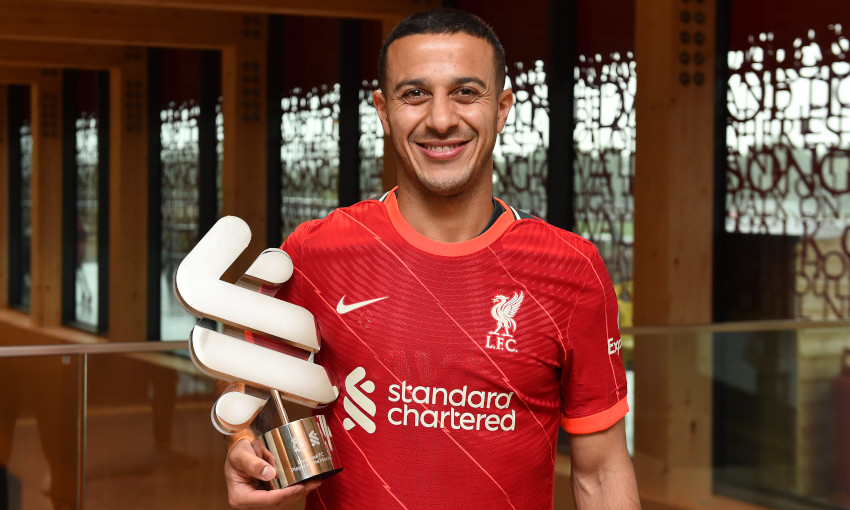 Thiago Alcantara has been named Liverpool's Standard Chartered Men's Player of the Month for April.

During a magnificent month for the Reds that featured seven wins from nine games as they continued to challenge for four trophies, Thiago was involved in every match and started seven times.

The midfielder was an instrumental figure during a run that saw Liverpool chalk up memorable Anfield victories over Manchester United and Everton, and beat Manchester City at Wembley in the Emirates FA Cup.

Jürgen Klopp’s side also maintained their journey in the Champions League with successes against Benfica and Villarreal.

Thiago’s form earned him the Player of the Month prize, which he collected at the AXA Training Centre, ahead of Luis Diaz and Sadio Mane.

“It was a really great month,” the No.6 told Liverpoolfc.com.

“We had some decisive games in the whole month, we had Champions League, important domestic cups as well, Premier League. It was a great month for us.”

Having played the majority of his first season with Liverpool behind closed doors, Thiago has struck up a strong and mutually appreciative relationship with fans since their return to stadiums this term.

And he explained the influence supporters have had on the team during a campaign in which the Reds have lifted the Carabao Cup and FA Cup and continue to fight for two more trophies.

“At the beginning it was very tough to play without the fans,” he said. “It was kind of a new engagement with the stadium itself and how we had to prepare for the games. It was like training, but seriously – it was real.

“But now with fans again and especially at Anfield, it’s completely different. You know the fans are really here, involved in the game. It’s an important part for all of us.

“Then you try to find that connection with the game situation with them – with the football, with gestures, in moments that we are not having the best game they are there to support us and it converts us to even do better. Massive, massive help.”

A serial winner at previous clubs Barcelona and Bayern Munich, Thiago is loving every second of being part of such a competitive Liverpool squad.

The Spain international added: “You have to get along with different individual types of football you have; to know each other, how we play, how we like to have the ball, how we defend. And then in a group how we have to react and act with the ball.

“It was so far an amazing experience and I’m enjoying it a lot.”