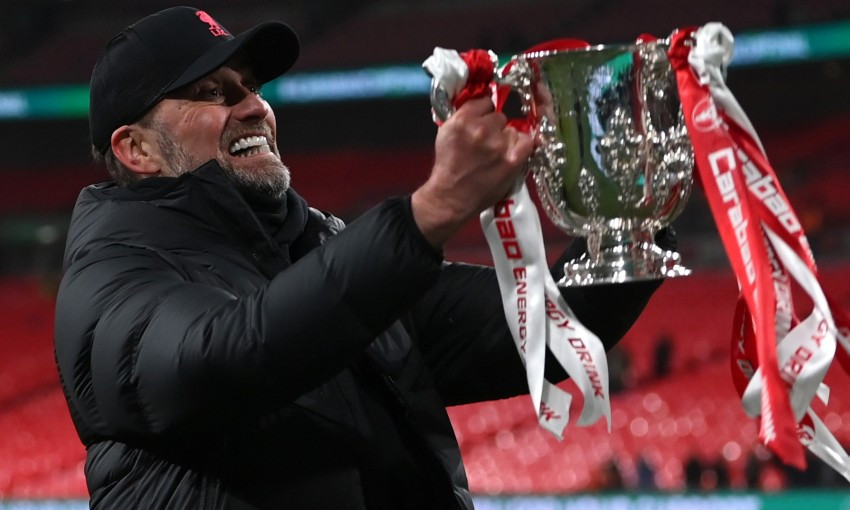 Jürgen Klopp hailed Caoimhin Kelleher as the world’s best No.2 goalkeeper and saluted every one of his players who contributed to Liverpool’s Carabao Cup triumph after the penalty shootout win over Chelsea in the final.

The Reds won the fifth major trophy of Klopp’s reign in the most dramatic of fashion as all 11 of their players, including Kelleher, scored their spot-kicks before Kepa Arrizabalaga skied his over the crossbar.

The final was a tense and keenly contested affair, with both sides having goals disallowed – Joel Matip for Liverpool and Kai Havertz (two) and Romelu Lukaku for Chelsea.

Kelleher and Edouard Mendy also made numerous outstanding saves to ensure it remained goalless after 120 minutes of action, with Liverpool then edging the shootout 11-10.

Read everything Klopp said during his post-match press conference below…

On how his relationship has grown with Kelleher...

Is it only the last four years? So I don't know when I saw Caoimhin the first time but it's true, it's quite a journey from when I saw him the first time, from the boy I saw the first time to the man he is today. I saw from the first second that he is in an incredible talent. First John Achterberg, then Jack Robinson joined us since then as well, the boys are very, very positive. And if you know how a football team works and you know that goalies are very often separate, so I don't see them all the time but I see them in decisive moments. So, the development is absolutely top class. Alisson Becker is the best goalie in the world for me. There are goalies out there but this goalie is absolutely insane. But to be 100 per cent honest, for me Caoimhin Kelleher is the best No.2 in the world as well, especially for the way we play.

He had an incredible game. People asked me rightly two weeks ago or something if we will give him Caoimhin another game to get some rhythm or whatever. To be 100 per cent honest, it was the first time I thought about it, 'Yeah, he has rhythm.' But that's life of a No.2, especially for a young No.2 that you just have to be ready when you are called. The game he played tonight was absolutely incredible. I'm not 100 per cent sure I have the full story of the whole game but I can remember at least two incredible saves – probably there were more. So, he proved that the decision to line him up was absolutely right. And then in a very spectacular penalty shootout, he showed the whole range of his skillset. First and foremost, he's a goalkeeper but he finished one off with his really skilled feet. Top class.

On whether it was the perfect way to win the trophy because 'everyone contributed'...

Perfect would have been if we could have had more players on the teamsheet already. Today I had to make a few really tough decisions and I said [to] the boys in the meeting when all the boys were in – even the boys who were not on the teamsheet – that, 'This here is my squad. Plus – and now I have to be careful that I don't forget anybody – Tyler Morton, who was not with us in the hotel because he's slightly injured, Conor, Owen, Harvey from the U18s, Elijah played some minutes as well, Adrian saved us in Preston. The whole journey was absolutely outstanding. We had Adrian at Preston and then we scored the two goals. Without Takumi and without Divock and the goals they scored in the competition, we would not be here. So then we were 3-1 down against Leicester, I think most of the people wrote us off in that moment, so we came back – wonderful story, penalty shootout, won it. Then we had to change the away and the home game with Arsenal – 0-0 at home against 10 men, nobody was really positive about the second leg and we went there and won in a really nice manner.

And now tonight, facing Chelsea, there was like two lions going for each other – it was absolutely crazy. They started better, we took over and were then better. Second half, started again with two really good moments of Chelsea, we sorted it again and then in the end everybody was tired on the pitch obviously and then you have to get through. Then the penalty shootout, one of the most spectacular I ever saw. Absolutely great to win it like this. We called it the people's cup but the whole journey was a squad journey and that's what I love most about it.

So, it’s good. Look, we were here and lost a final in a penalty shootout like six, seven years ago. Afterwards nobody talks about it, it’s like, ‘You were twice at Wembley and you lost both finals’. It was a tight game, we were clearly better in the second half against Man City that time. We should have won it in the second half, didn’t, and then in the shootout we lose 4-1. They scored with all of them I think, we missed one, I’m not 100 per cent sure anymore. That’s life. As a professional sportsperson, that’s life. So now, in 10 years’ time, nobody will ask, ‘How did you win exactly against Chelsea?’ You just have to win it. Were we better tonight than that time against City? I’m not 100 per cent sure to be honest but we are more experienced, that’s a massive difference. We don’t get nervous when things don’t go well. We keep really our nerve and stuff like this.

How I said, the start of the game was clearly better from Chelsea but all of a sudden, we were really in the game and then we let them run and we were the clear dominant team. I’m not sure 100 per cent but the first half was like 63 or something [per cent] possession - against Chelsea, that’s not that easy so there was a lot of good football stuff obviously. But over 120 minutes you cannot hold them back and away from your goal, so they had their chances and obviously they scored ‘goals’ more than us, but they all were offside. That’s pretty harsh to take for them I can imagine but I’m really happy about the effort and all these kind of things and yes it’s a big one for us because it’s the first time for this group but the ninth time for the club, which is very important as well.