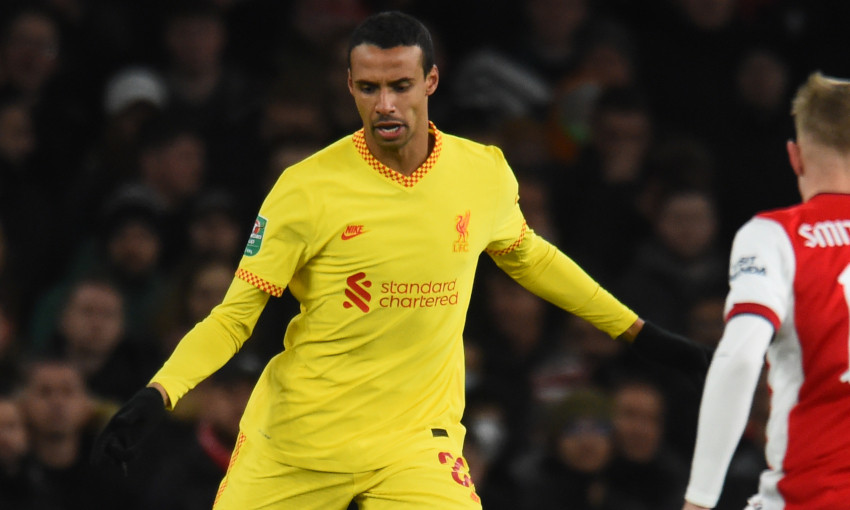 Jürgen Klopp has confirmed Joel Matip was taken off at half-time on Thursday night as a precaution.

The centre-back was replaced by Ibrahima Konate during the interval of the 2-0 Carabao Cup win over Arsenal that saw Liverpool reach the final.

Asked whether Matip’s withdrawal was tactical or a fitness issue, Klopp said at Friday’s pre-match press conference: “No, Joel was not tactical. My God, how good was Joel.

The Reds will assess several knocks sustained at Emirates Stadium ahead of Sunday’s clash with Crystal Palace, as well as the condition of Alex Oxlade-Chamberlain’s ankle problem.

“Ox, we hope and pray, he was running yesterday but we don’t know what that exactly means for today. It would be helpful if he could train before the game. I don’t know yet,” added Klopp.

“The rest as far as I know were only knocks. Yes, we got knocks, proper knocks. Wow, second yellow from Partey against Fabinho, that was a proper knock.

Harvey Elliott returned to team training earlier this week for the first time since the ankle ligament injury he suffered at Leeds United last September.

And the No.67 could come into contention for match action early next month.

“It’s outstanding,” Klopp said of seeing Elliott back in sessions. “I have a really nice office with a really good view on the pitches and when Harvey did his rehab sessions the last weeks, I could watch probably five of them, so I got already excited by watching them and then he came back. Now it’s really cool.

“He was out for a long time so we cannot and will not and should not rush it, but he looked directly like he could play! We had to force ourselves a little bit to say, ‘No, no, that makes no sense after that long period.’

“But I’m pretty sure after the international break he should be ready.”