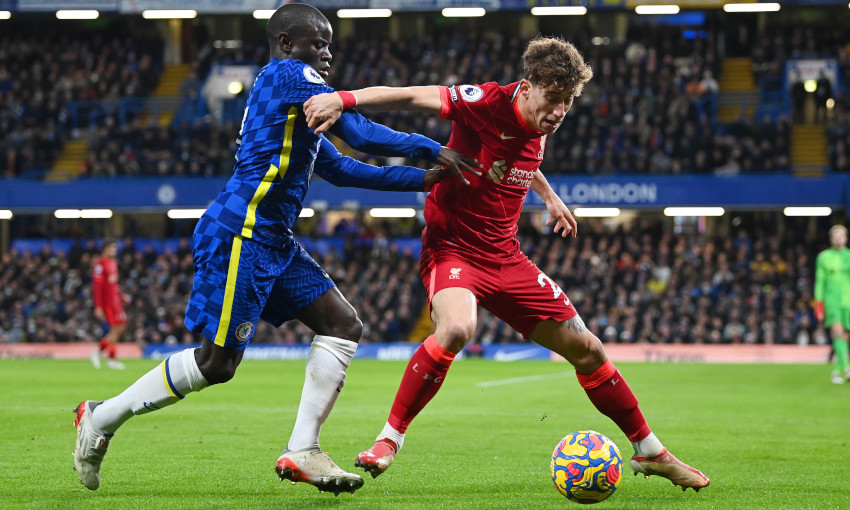 Liverpool and Chelsea played out a frantic 2-2 draw in an action-packed Premier League contest at Stamford Bridge.

Goals from Sadio Mane and Mohamed Salah put the Reds two up by the midway point of the first half on Sunday, but the home side hit back and were level at the break courtesy of Mateo Kovacic and Christian Pulisic.

Caoimhin Kelleher – starting with Alisson Becker ruled out due to a suspected positive COVID-19 test – and Edouard Mendy took centre stage in the second half, with both goalkeepers making excellent saves to ensure a relentlessly intense clash ended all square.

Roberto Firmino and Joel Matip were also sidelined by suspected positive COVID-19 tests and three changes were made by Liverpool, who were led by Pepijn Lijnders in the absence of Jürgen Klopp.

As well as Kelleher replacing Alisson, Ibrahima Konate came in for Matip and James Milner returned in place of Alex Oxlade-Chamberlain in midfield.

A booking after just 15 seconds for Mane - dished out following a collision with Cesar Azpilicueta as they were set to compete in an aerial duel - set the tone for a chaotic encounter.

Salah had already seen an effort saved by Mendy before a vital intervention from Kelleher prevented Chelsea from taking the lead.

Kai Havertz charged down Trent Alexander-Arnold’s attempted clearance and the ball dropped kindly to Pulisic, but Kelleher read the American’s intentions and dived at his feet to paw to safety.

Mane pounced once Trevoh Chalobah had misjudged his attempt to intercept Diogo Jota’s searching pass, with the No.10 subsequently rounding Mendy prior to slotting home.

With the tempo having subsided slightly, the Reds began to enjoy more prolonged periods of possession and one such spell would produce their second goal with 26 minutes on the clock.

A patient sequence of passing was accelerated in typical fashion by Alexander-Arnold, who marked his 200th appearance for the club with another assist.

The right-back picked out Salah with a wonderful, clipped ball and the Egyptian did the rest, speeding past Marcos Alonso in the area before drilling a near-post finish beyond Mendy.

A last-ditch tackle by Chalobah denied Salah the chance to make it three and Chelsea clawed their way back into the match in the final stages of the first half.

First, Kelleher’s punched clearance to repel Alonso’s free-kick was met sweetly on the volley by Kovacic to make it 2-1, before Pulisic latched onto N’Golo Kante’s touch and found the top corner.

With Chelsea’s ascendancy having been interrupted by the half-time whistle, Liverpool were able to clear their heads at the break and carried the greater attacking threat in the early stages of the second period.

Twice in quick succession fine saves by Mendy were required to deny the Reds a third, with Salah and Mane the players foiled.

Salah’s sight of goal originated from a Chelsea corner, with the No.11 trying to loft a shot over Mendy from all of 30 yards on the counter only for the goalkeeper to palm wide at full stretch.

Then, a sweeping move from back to front concluded with Mendy redirecting Mane’s drive past the post following a sharp one-two between the No.10 and Salah.

However, Kelleher was again needed to thwart Pulisic – the ‘keeper showcasing lightning-quick reaction speed to palm an attempt away – as the hosts sought to forge ahead for the first time in the game.

The Reds introduced Oxlade-Chamberlain and Naby Keita from the bench midway through the half and the momentum duly swung this way and that between the teams as both sought to strike the decisive blow.

Indeed, it was Liverpool who finished the game on top, but a winning goal never arrived and the sides were left to settle for a point apiece.