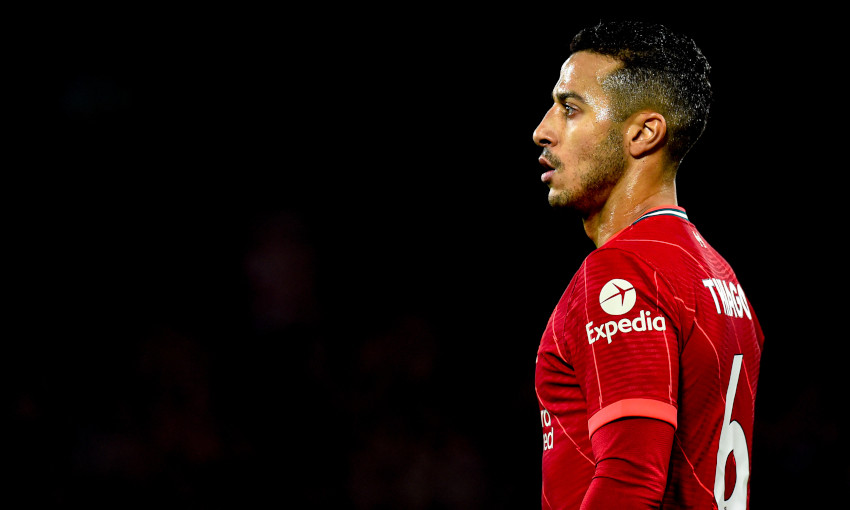 Thiago Alcantara has been an instrumental part of Liverpool’s eight-game winning run in all competitions – but he’s not satisfied with his performances.

The No.6 has started seven of those fixtures, scoring two goals in the process, but admits he feels he can still move even further forward through the gears.

“For sure I came to a club like Liverpool to try to win all games, play all games, and if it's in the starting XI, much better.

“I was already settled with the team last season but now, for sure, with the crowd again and with a bit more of a normal situation in our daily routine, so it is much more as it was during my life.

“Now we are in a strange period but at the same time we just have to adapt to the situation and try to get through it as best we can.”

His first – a technically perfect long-range half-volley against FC Porto – won the club’s Goal of the Month competition for November before he followed that up by finding the net in an Anfield victory over Southampton.

“In the position that I am, more assists and more goals – we want this as much as we can,” he said.

“But I am more than pleased with the team performances, that we win the games, being solid and also doing this kind of solid performance that we do mostly every game right now.”

After Thursday’s 3-1 success against Newcastle United, Liverpool currently sit in second place in the Premier League table, one point off Manchester City.

The Reds also blazed through their Champions League group, winning all six fixtures – a record for an English club – to set up a last-16 meeting with Internazionale.

“Right now, if the season ends in a month, I can say that we are ready to play for everything or to achieve everything,” Thiago said. “But I think it's too early to say that we want to win this and this, but we are a team that wants that.