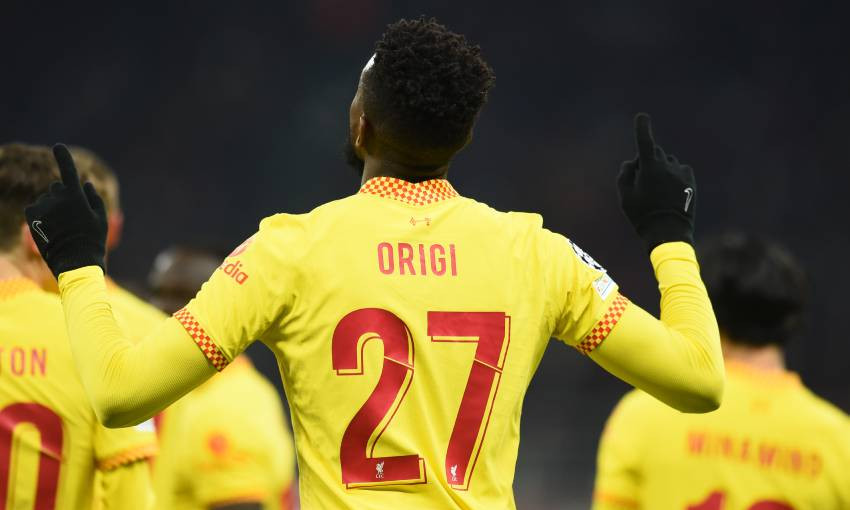 Liverpool concluded their Champions League Group B campaign with a 2-1 victory away at AC Milan on Tuesday evening.

Divock Origi was the match-winner once again with a 55th-minute header, after Mohamed Salah cancelled out Fikayo Tomori's opener during the first half.

Here are five talking points from the game...

The result saw Liverpool achieve a feat no other English club has done before.

They became the first English team to win all six of their Champions League group stage fixtures.

The Group B standings made for pleasant reading by the time of the final whistle. Eighteen points from a possible 18 (11 clear of runners-up Atletico Madrid), a goal difference of +11, 17 goals scored and just six conceded.

A fine achievement, especially considering qualification to the knockouts had been confirmed over a month ago.

Bring on Monday’s draw for the last 16.

Another Origi moment decided the outcome of a game.

This was in fact his first Champions League goal since the clincher in the 2019 final with Tottenham Hotspur.

Reacting quickly to Mike Maignan's palming out of a Sadio Mane shot, Origi used all of his neck muscles to thump a header into the far corner and put his side into the lead.

Impressively, the No.27 is averaging a goal every 79 minutes this season.

Two winners within the space of three days. Classic Divock.

Salah wasn't one of the eight changes Klopp made, and he truly made the most of his 64 minutes of action.

His well-taken finish nine minutes before half-time brought up 20 goals for the season in all competitions.

His seven goals in the Champions League this season is the most by any Liverpool player in the group stage of a European competition.

And finally, he became the first Red to net in five group fixtures of the same European campaign.

There was no doubt that Nathaniel Phillips deserved his opportunity at the San Siro.

The centre-half's performances towards the end of last season certainly helped Klopp's side qualify for nights like these.

Unsurprisingly, Phillips led the team for aerial duels won (four). But the undoubted highlight from his assured display was a cheeky drag-back inside his own penalty area that sold Zlatan Ibrahimovic and Franck Kessie.

"Situation of the game," his manager declared post-match.

The defender commented: “There was no real thought process behind it, to be honest. It was one of those things, it was just instinct and thankfully it paid off. I’m looking forward to watching that back."

The composure on display from Nat Phillips here... 👌 #UCL https://t.co/43cZfbNmek

The day started off well for the Academy as the U19s secured progression into the last 16 of the UEFA Youth League.

A 1-1 draw with Milan on Tuesday afternoon was enough to see Marc Bridge-Wilkinson's side top their group.

But the sweetener for the whole Kirkby set-up will have been watching a host of prospects take to the field at the San Siro.

Tyler Morton impressed once again in just his fifth senior appearance. No Liverpool player had more interceptions during the game than the midfielder, while he completed 84 per cent of his passes.

A pair of injury-time substitutions also brought about landmarks for two teenagers.

Striker Max Woltman came on for his first-team debut as Conor Bradley made his first outing in the Champions League.