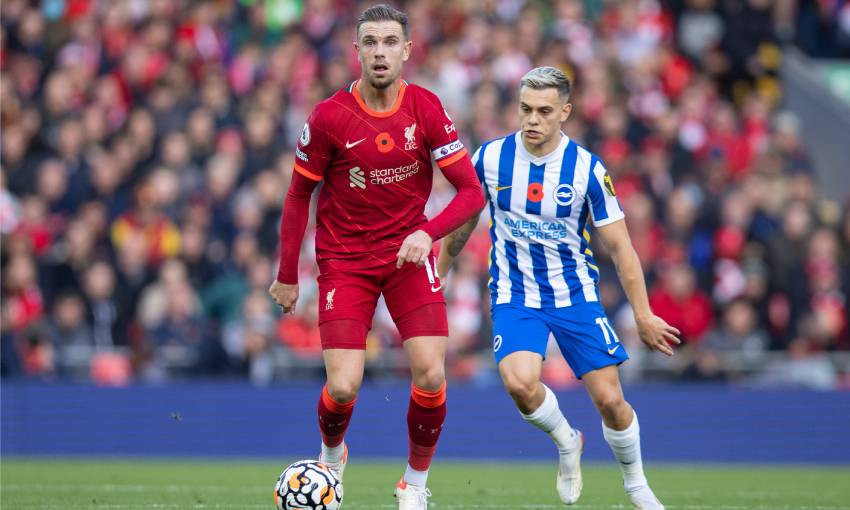 Liverpool were held to a 2-2 draw by Brighton & Hove Albion in Saturday's Premier League clash at Anfield.

Jordan Henderson fired the Reds into the lead after just four minutes of play, finding the top corner from Mohamed Salah’s lay-off with a first-time strike.

Sadio Mane doubled the advantage with a close-range header, assisted by a pinpoint delivery from substitute Alex Oxlade-Chamberlain, before Enock Mwepu reduced the deficit with an audacious curling shot from the corner of the area.

Brighton then drew level in the 65th minute through Leandro Trossard, who prodded beyond Alisson Becker after collecting Adam Lallana’s pass, ensuring they took a share of the points.

Liverpool’s teamsheet showed two changes from last weekend’s emphatic 5-0 win at Manchester United, with Mane and Curtis Jones coming in for Diogo Jota and James Milner. Naby Keita was deemed fit to start, while Tyler Morton was named on the bench.

Liverpool got the action under way at Anfield looking to reach the milestone of 20 games unbeaten in the top flight since embarking on the run back in March.

However, they almost found themselves behind inside three minutes as Solly March escaped beyond the hosts’ backline and found himself facing Alisson. His attempt to drive the ball across the goalkeeper and into the far corner was repelled by the gloves of his opponent, however.

And the Reds’ response to the early threat was a perfect one.

Salah collected play on the right and manoeuvred into the area before rolling it back to Henderson, who dispatched the ball into the top corner with a first-time strike.

Nevertheless, Alisson’s brilliance was required to intervene once more on the 15-minute mark. This time the Brazilian flung himself to his left to deftly touch Yves Bissouma’s swerver onto the post and behind.

Liverpool again provided a riposte – but this time Roberto Firmino scooped high over the bar when slid into space inside the box by Salah.

Jürgen Klopp’s side were then forced into an early change as Keita was unable to continue following a knock. Oxlade-Chamberlain replaced him.

The substitute wasted little time in making his mark. Picking up the ball on the right, Oxlade-Chamberlain swung a magnificent cross towards the back post, finding the head of the unmarked Mane. The No.10 made no mistake, nodding home from six yards out. 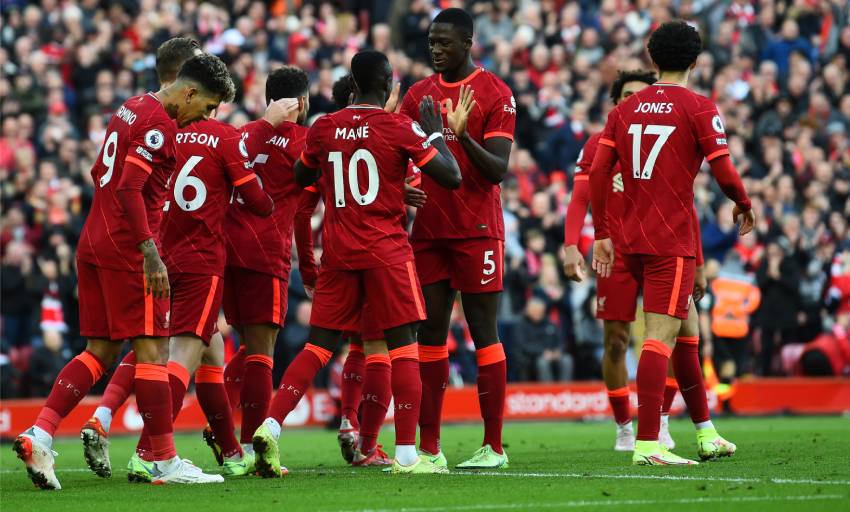 Mwepu headed over from a Marc Cucurella delivery as Brighton looked to force themselves back into the contest, while Lewis Dunk blocked a seemingly goal-bound attempt from Firmino inside the area.

Next, the VAR intervened to deny Liverpool a third, with Mane deemed to have handballed when closing down an attempted pass from Robert Sanchez and diverting over the line.

Mwepu then halved the home team’s advantage when he beat Alisson with a stunning curling effort from outside the area that looped over the goalkeeper’s head.

The Reds had a second effort chalked off immediately after the break when Salah was flagged offside from Mane’s pass, before Alisson needed to save from Lallana’s low drive at the other end.

Brighton had continued to pose a threat following the restart, however – and they drew level just after the hour when Lallana played in Trossard, who kept his composure to step inside Andy Robertson and drill beyond Alisson.

Trossard thought he’d put the visitors in front with 15 left on the clock, but his celebrations were cut short by the raised flag of the referee’s assistant.

Jota replaced Firmino for the final stages as Liverpool sought a winner, but they were unable to muster a breakthrough.