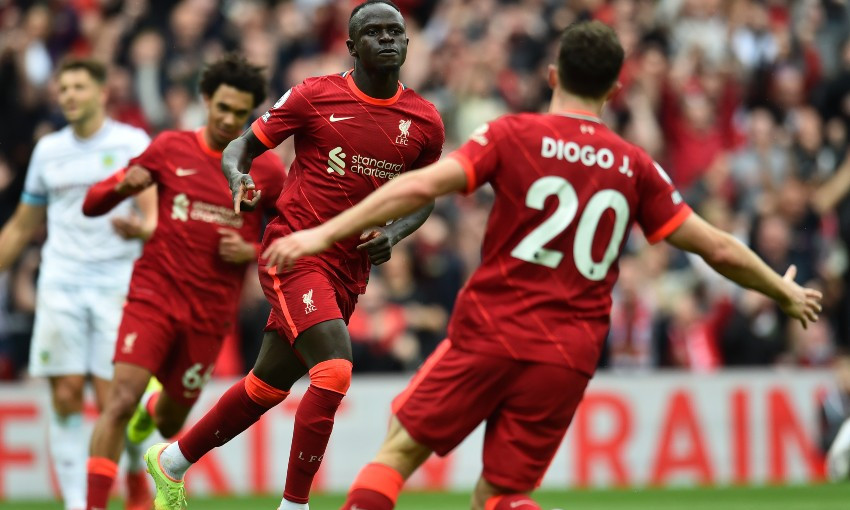 Goals in either half from Diogo Jota and Sadio Mane ensured the Reds made it two wins from two Premier League outings this season before L4’s first capacity crowd since March 2020.

Amid an unforgettable, emotionally-charged atmosphere, Jota’s glancing header gave the hosts an early lead, before Mane sealed all three points by rounding off a lovely sequence of passing in the 69th minute.

Jordan Henderson and Harvey Elliott came in for James Milner and Alex Oxlade-Chamberlain as Jürgen Klopp made two changes to his starting XI.

Thiago Alcantara and Andy Robertson were named on the bench, while Milner missed out due to a slight knock and Fabinho was absent on compassionate grounds.

Jota served an early warning of his aerial prowess by climbing high to meet Trent Alexander-Arnold’s free-kick, only to nod wide.

Sharp reactions from Alisson Becker saw Chris Wood’s header repelled as Burnley looked to snatch the lead and, a matter of moments later, Liverpool were in front.

Kostas Tsimikas produced a fine cross that the ever-alert Jota darted to meet with a deft header which nestled in the far bottom corner and elicited a long-awaited Anfield eruption.

Home fans and players alike thought it was two soon after when Mohamed Salah stroked home Elliott’s weighted pass, but the Egyptian was denied following a VAR review.

A gorgeous Alexander-Arnold pass, perfectly floated in behind the Clarets’ backline, then found Mane’s clever run, although the No.10 could only volley over on the slide.

Ashley Barnes had the ball in the net in the opening seconds of the second period, but the Burnley striker’s celebrations were cut short by the offside flag.

Liverpool’s response to that scare was one of confidence, though, and Salah saw an effort – earned by his lightning-quick footwork following Elliott’s delivery from the left – cleared off the line by Dwight McNeil on the hour.

Nick Pope thwarted Mane soon after, but Burnley’s goalkeeper was later powerless to prevent the forward from doubling his side’s lead.

A free-flowing move involving Virgil van Dijk and Elliott enabled Alexander-Arnold to play a cute around-the-corner pass into Mane, who did the rest by blasting low and hard beyond Pope.

Joel Matip then had a goal-bound header hacked clear as the Reds sought more goals, before Anfield rose to acclaim substitute appearances from Thiago and Joe Gomez to complete a hugely satisfying afternoon.