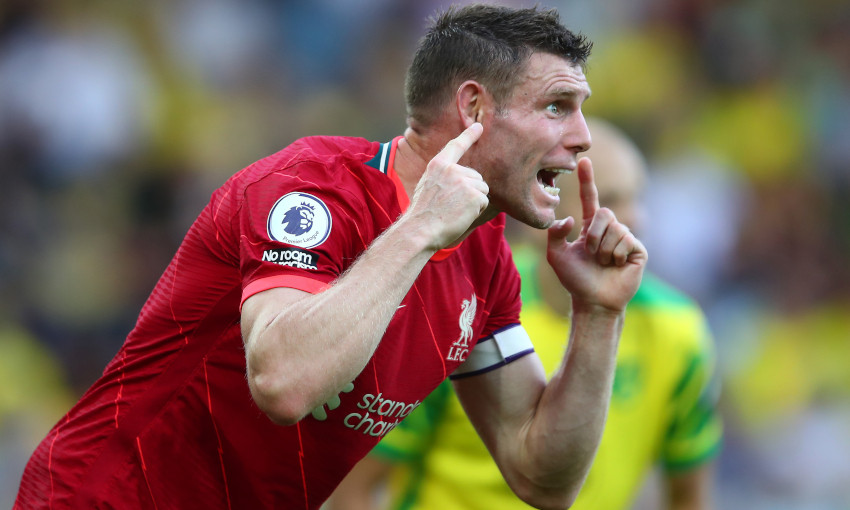 ‘Incredible,’ was James Milner’s description of playing in front of a full crowd again as Liverpool kicked off the new season with victory at Norwich City.

The midfielder captained the Reds in Saturday’s Carrow Road clash, which ended 3-0 in the visitors’ favour thanks to goals from Diogo Jota, Roberto Firmino and Mohamed Salah.

For the first time in 17 months, Milner and co competed against the backdrop of a capacity stadium – sharing the emotions of a successful runout directly with supporters.

The experience has whetted their appetite for the first Premier League match of the campaign at Anfield, with Burnley to visit L4 this weekend.

“It’s incredible,” Milner told Liverpoolfc.com post-match. “I remember the first few times I stepped out when there was nobody there and coming out of the tunnel it was the first time it really hit you because normally when you step out of the tunnel you either get the roar or booed or something, anything would have done, but it was just quiet and that’s what really hit you.

“But having our fans here today singing all the way through and seeing them at the end, amazing to have them back and obviously it will be special next week at Anfield as well.

“We’ve missed them and hopefully we can keep putting in performances and getting results like today for them.”

Jota’s poacher’s finish midway through the first half established an advantage against newly promoted Norwich that Liverpool built on impressively after the interval.

Substitute Firmino tucked home Salah’s pass for 2-0, before the latter curled in a third – scoring on the opening weekend for the fifth year in a row, a new Premier League record.

Even the perfectionist in Milner did not want to take anything away from the encouraging nature of the team’s work on matchday one.

“The result is pretty much perfect obviously with a clean sheet and different goalscorers, obviously it’s always nice for those guys to get off the mark,” said the No.7.

“The performance could have been better, we know that, but that’s pleasing that there is plenty to work on and it was a good day’s work.

“We knew they would come flying out both halves and it’s been a while for us as well, playing in that sort of atmosphere. You don’t forget about that but it’s something that we spoke about before and not letting that influence the game too much.

“Obviously it’s important that you get control of the game and maybe try to take the crowd out of it a bit and we managed to do that. In spells we probably could have controlled it a bit better but that’s probably trying to be a perfectionist – 3-0 first day of the season, you are not going to grumble at that.

“And the things we can do better we can work hard on this week and try to improve going into the next game.”