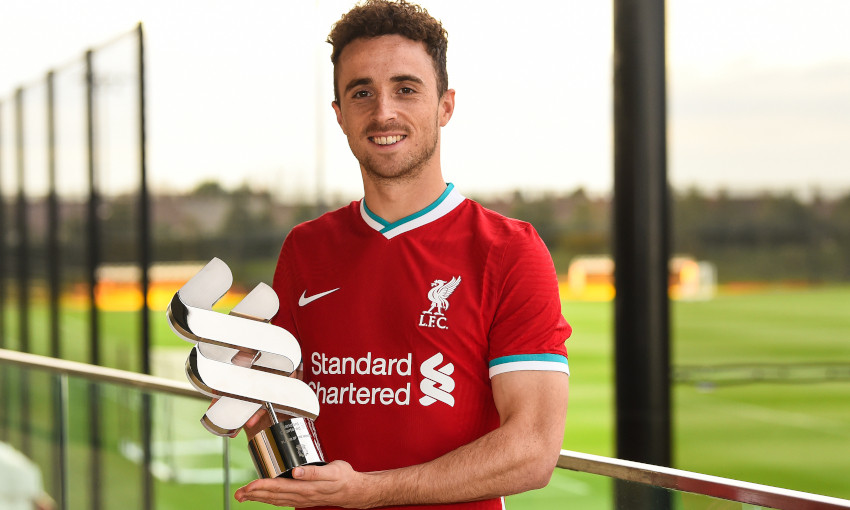 Diogo Jota has today been named as Liverpool's Standard Chartered Player of the Month for October.

The Portugal forward scooped the accolade following a fan vote on this website after striking three times in seven appearances.

Jota pipped Mohamed Salah and Sadio Mane to the prize and he told Liverpoolfc.com: “I’m very proud. It’s always a nice thing. I just want to thank the people who voted for me.

“I just wish I can keep working hard and keep getting results for the team, that’s what matters the most.”

Watch: Jota on winning October Player of the Month

Jota contributed three goals in as many Anfield matches to conclude October, beginning with a headed winner against Sheffield United.

The 23-year-old followed that up by netting in the Champions League tie with FC Midtjylland before coming off the bench to sweep in the decisive effort in a 2-1 success over West Ham United.

Asked if he had a favourite moment, Jota said: “Each goal is important to help the team. They were decisive goals. If I had to choose one, maybe the headed one because I don’t often score a lot of headers, so that’s a special moment.”

The summer signing’s outstanding form since joining from Wolverhampton Wanderers in mid-September has made him an instant fan favourite. 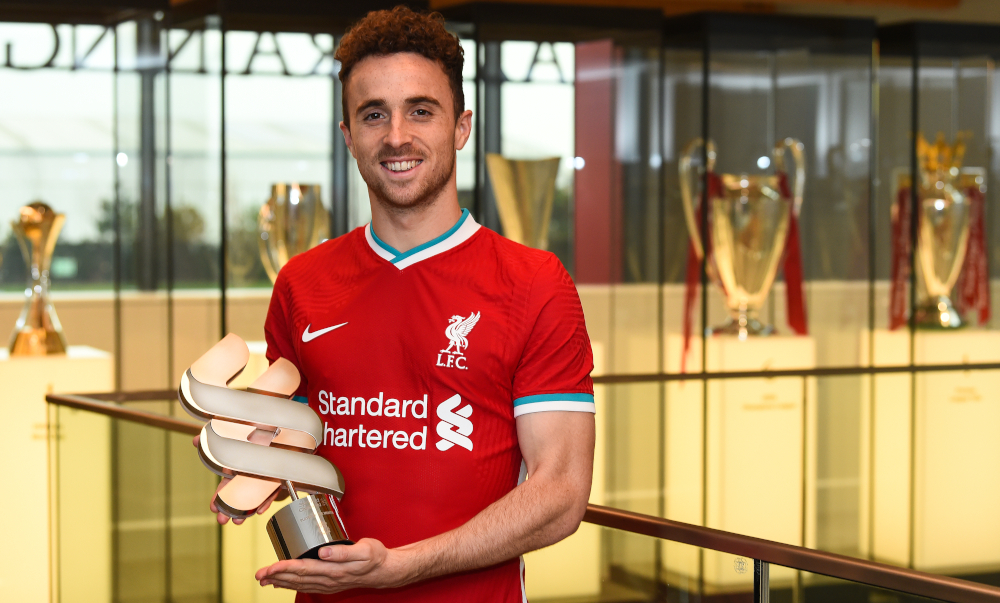 With matches continuing to be played behind closed doors, Jota has yet to experience the thrill of celebrating directly with Reds supporters - but he nevertheless feels a strong connection from afar.

“I also said that when I scored my first goal: I just wish the stadium could be full for an even more special moment. But I can feel their support on social media, even on the streets. I can feel them,” said the No.20.

“Of course, having them in the stadium is a different thing, I just wish that can happen again very soon. But I feel their support and I appreciate that, I’m thankful for that. And I just hope, like I said, we can keep winning games.”

Both Jota and Liverpool have carried their form into November so far, with a 5-0 win at Atalanta BC and a 3-0 defeat of Leicester City sandwiching a 1-1 draw against Manchester City.

The attacker delivered a sumptuous hat-trick in the Champions League victory over Atalanta and powered in another header on Sunday when the Foxes were beaten.

So, how closely are he and the Reds meeting their targets?

“Yes, this last game shows we are doing things right. Even the clean sheet, that was not happening a lot in the Premier League. That was really important,” said Jota.

“We scored three as well, we created a lot of chances, so I think we are on the right path. We just want to keep on working and keep getting results.”