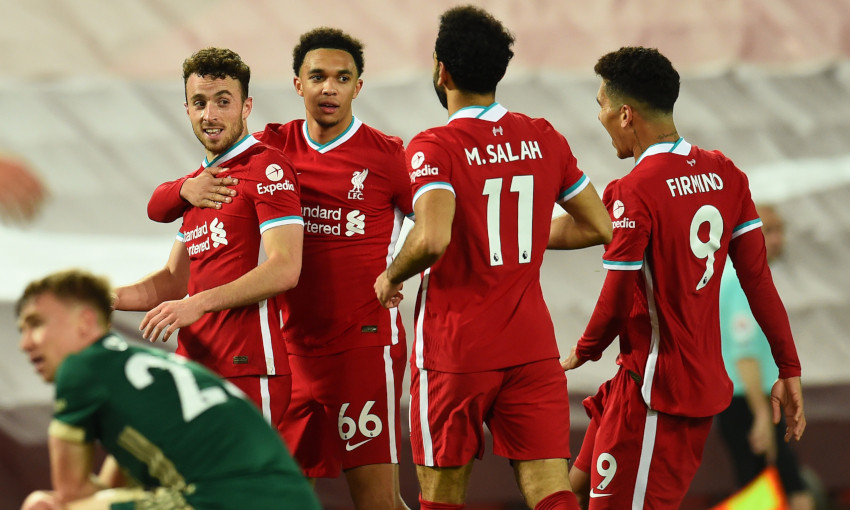 Liverpool came from a goal down to defeat Sheffield United 2-1 and return to winning ways in the Premier League on Saturday night.

Sander Berge’s penalty kick put the Blades into a 13th-minute lead at Anfield but the Reds restored parity shortly before the interval through Roberto Firmino’s first strike of 2020-21.

And after Mohamed Salah’s outstanding effort was chalked off due to offside, Diogo Jota provided the decisive moment with a clinical header at the Kop end.

The result moved Jürgen Klopp’s side up to 13 points from their opening half-a-dozen matches in the top flight and backed up their victorious start to the Champions League campaign in midweek.

Alisson Becker returned to make his first appearance since September 28 having completed his recovery from a collarbone injury.

There were also starts for Jordan Henderson and Jota as Liverpool made three changes from the 1-0 triumph at AFC Ajax on Wednesday. 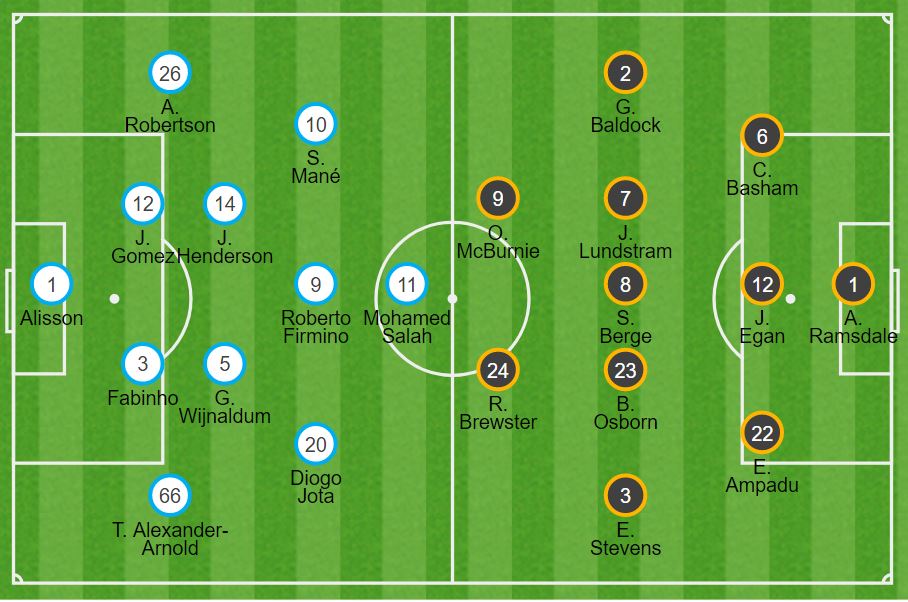 Back on home turf after more than three weeks away, the Reds started with intent and twice could have taken the lead within the opening three minutes.

First, Andy Robertson’s swerved pass in behind the opposition defence freed Sadio Mane and as Aaron Ramsdale rushed from goal, he pushed the ball towards the waiting Salah in the middle, only for John Egan to clear.

Trent Alexander-Arnold then tried his luck from a yard inside his own half, thumping a sublime free-kick that forced Ramsdale to scurry back and tip over the crossbar.

It was the visitors who registered a first mark on the scoresheet, however.

Fabinho’s challenge on Oliver McBurnie was initially judged to be marginally outside the area but a VAR review changed the award to a penalty, despite the hosts’ protestations.

Berge stepped up at the Kop end and found the net with his right-of-centre finish as Alisson moved in the other direction. 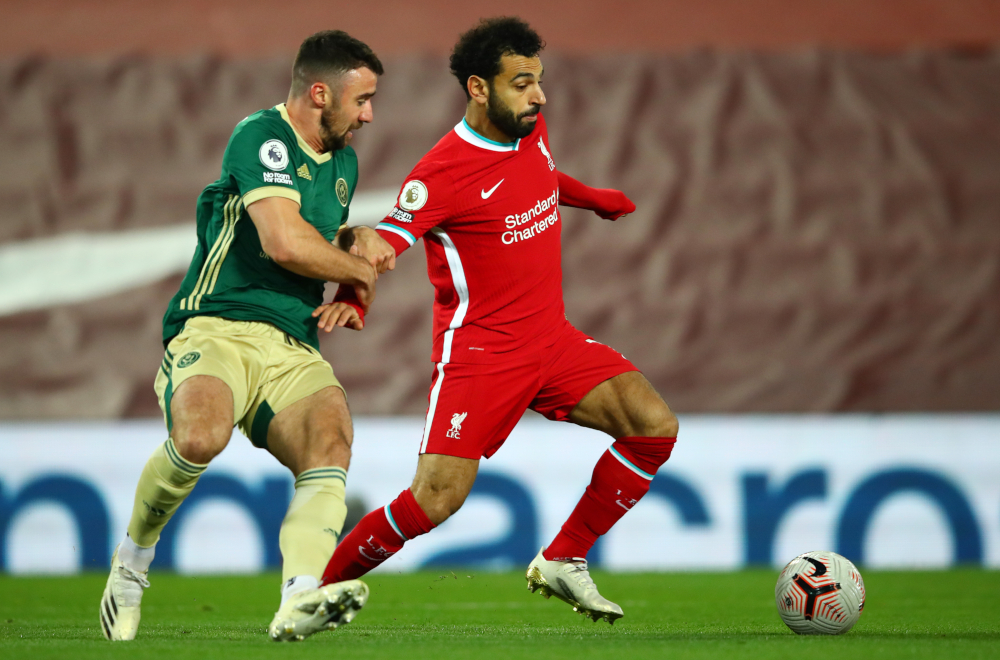 Georginio Wijnaldum drifted a 20-yarder too high before a pair of promising opportunities for the Blades to double the advantage at the other end.

McBurnie pulled a low hit wide when well placed in the left side of the box and from a similar position, Ben Osborn met George Baldock’s swinging cross with a firm volley that Alisson had to stop.

Egan again denied Salah at the last on 35 minutes, the Blades skipper getting a foot in first when Alexander-Arnold deftly hoisted a pass into his teammate’s run.

But Liverpool did get themselves back on terms before the break.

Patient build-up was accelerated when Henderson whipped in a cross from the right corner of the United box and though Mane’s on-target header was thwarted by Ramsdale, the ball fell kindly for Firmino to nudge home an equaliser. 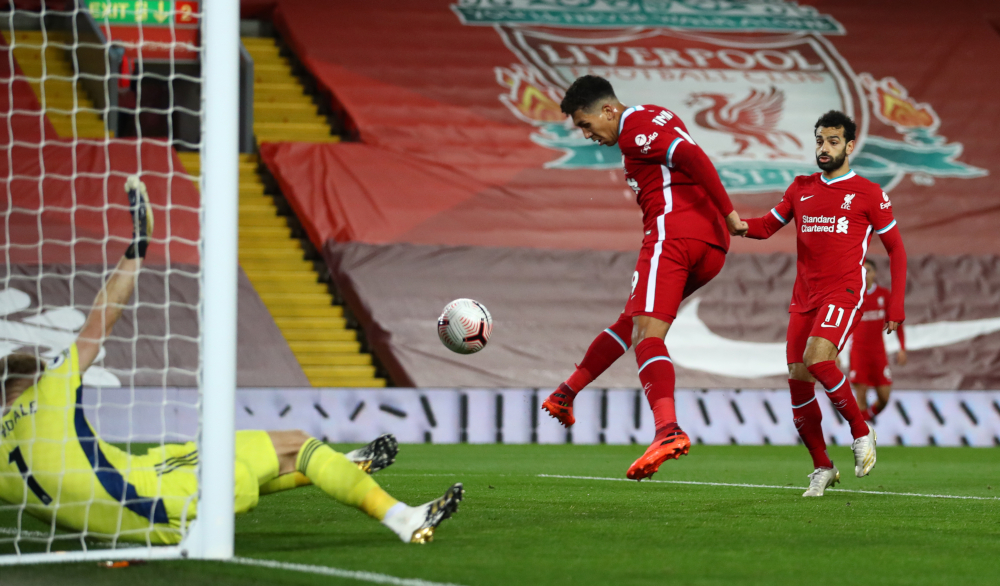 A bitty opening quarter-hour of the second half saw Salah send a curling effort too high as Liverpool tried to steadily take stronger control of the contest.

The game came to life from the 60th minute, though, and Joe Gomez had to make a timely block when United substitute Oliver Burke rolled Fabinho and moved in off the left byline to shoot.

Klopp’s charges then thought they had gone ahead with a sumptuous effort.

Alexander-Arnold’s sweep forward to Blades territory was exquisitely finished by Salah, who controlled with one touch and, without the ball touching the grass, poked a second beyond Ramsdale. But VAR stepped in to confirm the No.11 was offside.

It was a brief delay to the Reds grabbing the lead, however.

Just two minutes later, in fact, Mane made ground along the left flank, sufficient to deliver a troublesome cross that Jota handled with matching technique, guiding his header inside the right post for 2-1. 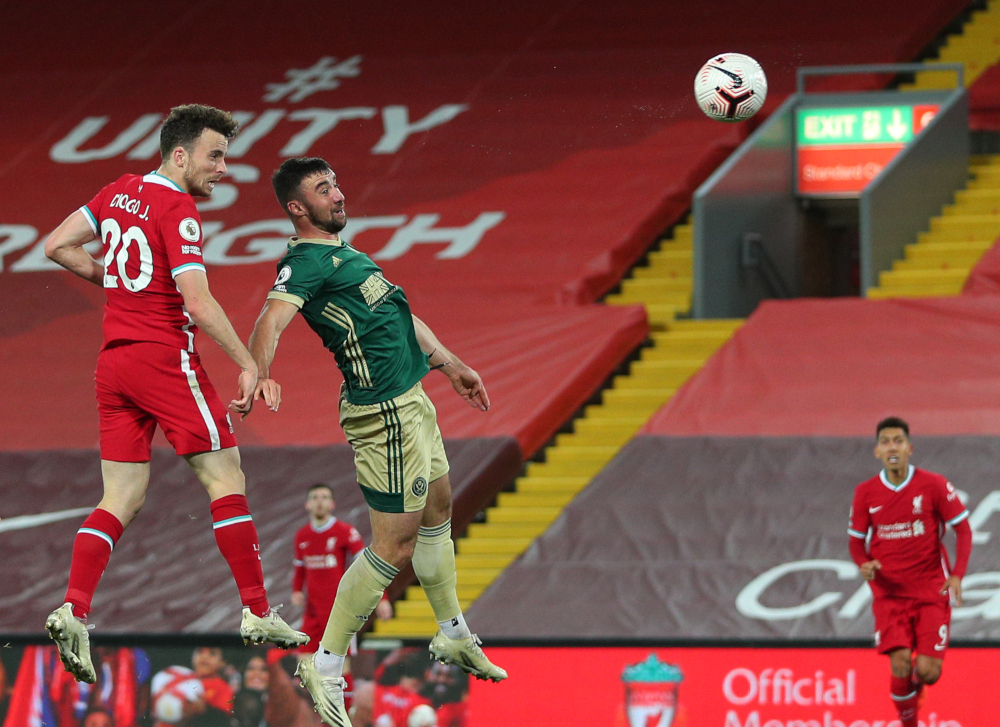 David McGoldrick wasn’t too far away with a fierce half-volley just moments after entering the action from the bench, and Salah was next thwarted by a post having wriggled into space and dinked past Ramsdale.

But there were to be no further changes to the scoreline and Liverpool secured their fourth win of the fledgling Premier League season.