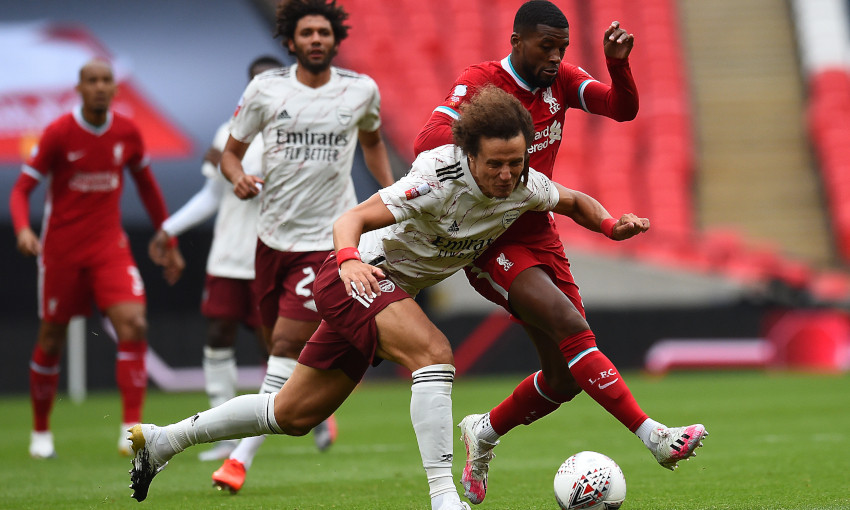 Liverpool were beaten on penalties by Arsenal after a 1-1 draw in Saturday's FA Community Shield.

Pierre-Emerick Aubameyang’s sublime strike in the early stages gave the Gunners a lead they held into the final quarter of the contest.

But Takumi Minamino, on from the bench, bagged his first Reds goal in the 73rd minute to bring his team level and force a penalty shootout at Wembley.

Rhian Brewster was the unfortunate player to miss, sending his spot-kick against the crossbar, and Arsenal netted from each of their five to claim the trophy.

James Milner came into the starting XI in the only change from Tuesday’s friendly in Salzburg and the No.7 captained the side.

Virgil van Dijk was fit to feature from kick-off despite sustaining a head injury earlier in the week, while summer signing Kostas Tsimikas was on the bench.

Liverpool stepped out at Wembley to contest the Community Shield for a second successive season, this time as Premier League champions and with the game held behind closed doors.

And Jürgen Klopp’s side had the ball in the FA Cup winners’ net within seven minutes – though it was ruled out for offside.

Van Dijk had edged too far ahead of the Arsenal backline as he met Andy Robertson’s free-kick from the left and nudged the ball beyond Emiliano Martinez. 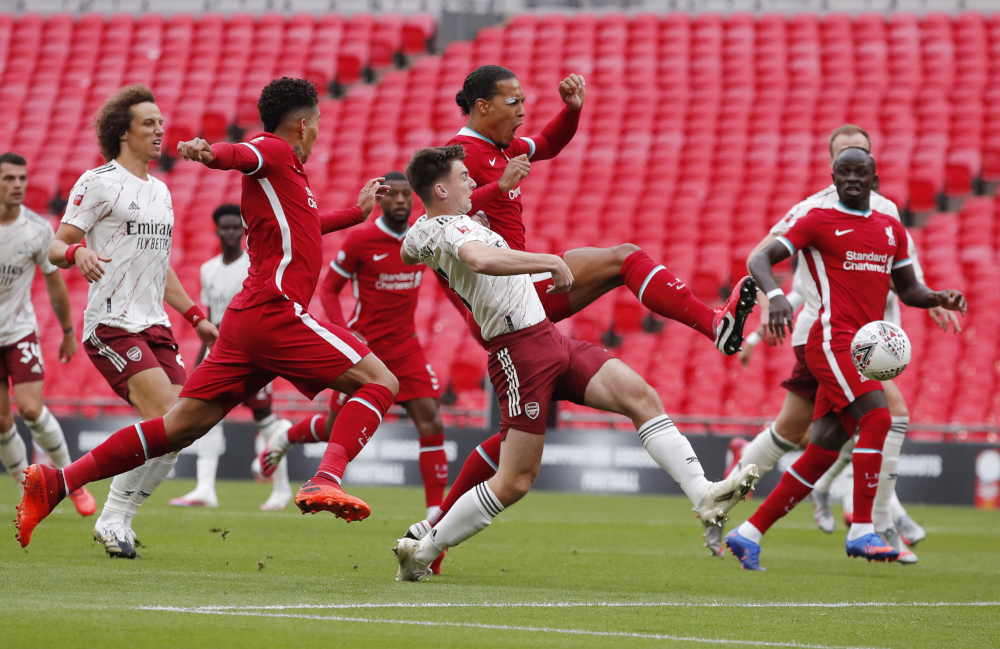 Next, Milner was visibly frustrated with himself when a promising sight of goal came his way. Neco Williams’ lofted cross married with the skipper’s well-timed run into the centre of the box but he headed over the crossbar.

And in the same minute of play, the 12th, the Gunners netted themselves.

Bukayo Saka spotted Aubameyang with space to attack on the left flank and the Arsenal captain rapidly ducked into a shooting position 20 yards out and whipped his strike into the far corner for 1-0.

Again Saka was the creator, sliding a pass across the area that his teammate could meet with a first-time effort that forced the Liverpool goalkeeper into a low dive to get gloves on the ball.

Robertson was an outlet on the Reds’ left for much of the first half and his 40th-minute delivery was turned into a half-chance when Sadio Mane flicked it on to the back post, but it evaded Van Dijk and the sides headed into the break with the Gunners a goal up. 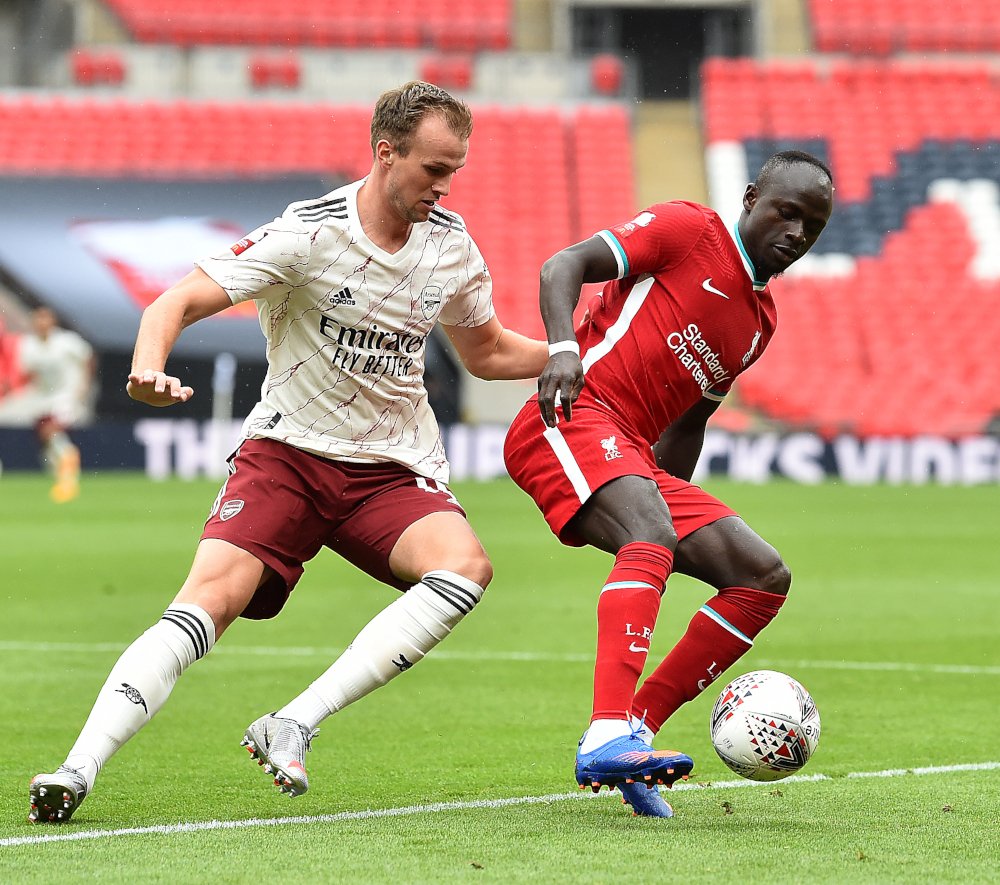 Liverpool restarted brightly and six minutes into the second half, Roberto Firmino went close to a leveller with a surge and shot.

The Brazilian shifted into space and dribbled to the edge of the area before attempting a curving hit that whistled the wrong side of the right post.

Soon after, Robertson’s sublime around-the-defence pass from deep released Mane into a one-on-one opportunity against Martinez but the No.10’s rolled finish was blocked by the Arsenal goalkeeper.

Klopp reacted by making personnel and positional switches shortly before the hour mark; on came Naby Keita and Minamino, with the latter joining Firmino, Mane and Mohamed Salah in attack, while Fabinho dropped into defence.

And it wasn’t long before Minamino hauled the Reds on terms.

The substitute was the beneficiary when his attempt to link up with Salah at close quarters in the box saw the ball run free and he took maximum advantage with a clinical dispatch past Martinez. 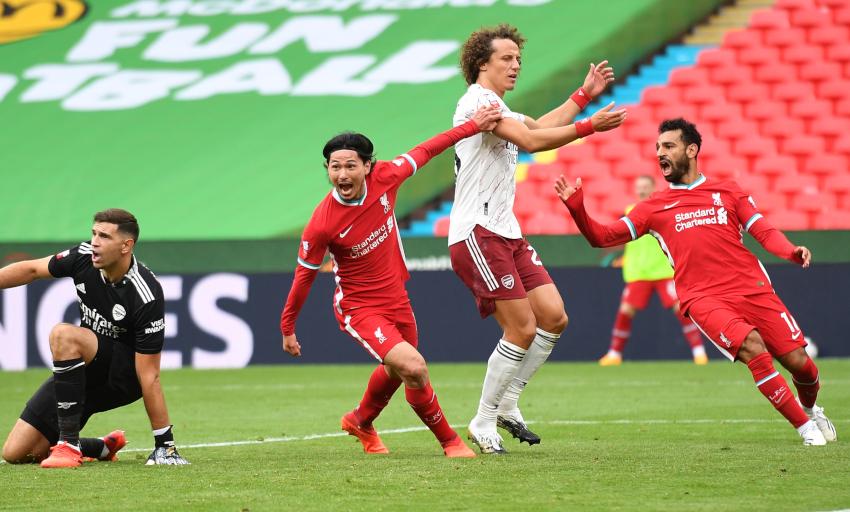 Mane might have won it when he brilliantly brought down Robertson’s cross but Martinez again came off his line to prevent him, while Joe Willock sent a header wide from a good position four minutes from time.

Liverpool went first from 12 yards, Salah firing home to kick off the shootout, but Brewster’s effort crashed off the crossbar from their third penalty and Arsenal remained perfect to clinch the Community Shield.