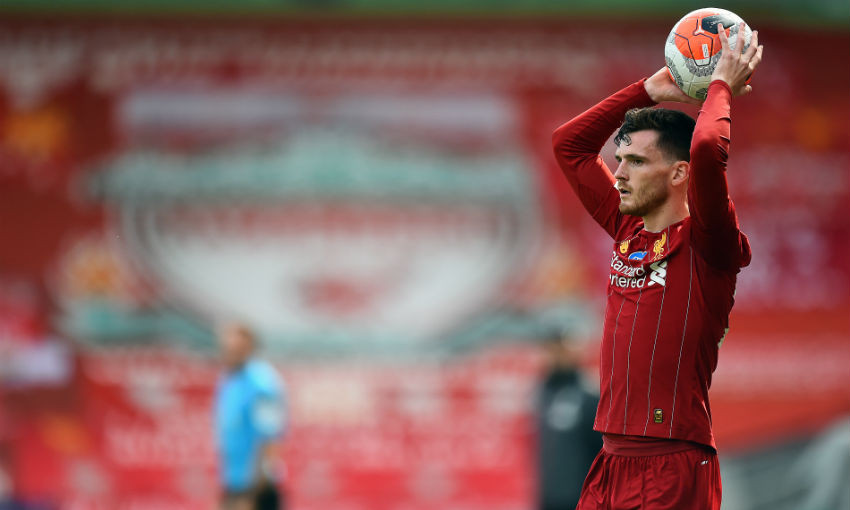 The left-back sustained a knock in the latter stages of Sunday’s 2-0 victory over Aston Villa at Anfield but, speaking immediately after the match, stated that he will be available for the Premier League champions’ trip to the Amex Stadium.

“All good, yeah,” Robertson told Liverpoolfc.com, when asked about his fitness for the game against Graham Potter’s team.

“I’ve just got a bit of a dead calf just in the challenge with Grealish with about 20 minutes to go, just a tangle of legs and I got a dead calf. We’ll be good to go, it’s a hectic period [and] we need to keep as fresh as we can.

“Obviously after 13 weeks off we’ve now got three weeks of a lot of games, so that’s what the squad is for. We made four subs today and every single one of them had a massive impact and we made three changes to the starting line-up, so we’ll wait and see what the manager does on Wednesday.

Robertson also discussed the satisfaction of bouncing back following last week’s defeat to Manchester City, the Reds’ will to win and Alisson Becker, who made several fine saves versus Villa to keep another clean sheet.

Read on for more from our interview with the Scotland captain…

Andy, it must feel good to get the three points after the frustration of the visit to the Etihad Stadium?

Look, Thursday was a frustrating performance. We weren’t happy with certain areas of our game. It was a strange one. I think over the last five or six games we’ve played against Manchester City that might have been the most chances we created against them, and in the first 25 minutes we could easily have went one or 2-0 up. Obviously when you don’t take your chances we are playing against a team that has got nothing really to lose and they went out and took their chances, which we didn’t. In certain areas we could have done a lot better, of course we could have, but it was important not to overreact. We are champions in our own right, and that game made us 20 points clear of that team so that shows you how well we have done this season.

We can all have off days and yeah, we didn’t like it, but we managed to bounce back today. It might not have been the best performance in the first half but you are playing against a team that is fighting for their lives and relegation and I know how that feels. When you do that you need to match their fight and you need to match their endeavour and we did that, and it took a bit of time for any sort of quality to shine through in that game. But once it did, then we were the ones doing it and we managed to capitalise on that. [We] took our chances and 2-0, I think, was a fair result.

This Liverpool team gets a lot of praise for its style of play, but you’ve also got that grit and determination to find a way to win when a game perhaps isn’t flowing as you would like, too...

That’s why we are champions… when sometimes times are tough we dig even deeper and some teams might have been thinking, ‘OK, it’s not our day’ in the first half. I didn’t think we played badly but they put up a good defensive block, they had a couple of chances themselves and some teams crumble under that - not us. We managed to shine, we managed to hold our nerve and then Naby’s pass for Sadio was a fantastic pass and we take the goal. Once we went 1-0 up we really started to put our quality onto the game and that’s why we limited their chances and we had a couple more ourselves. Luckily Curt managed to seal the three points for us.

Finally, the manager said after the Merseyside derby a few weeks ago that we shouldn’t take Alisson for granted. He made some fantastic saves again to preserve your 15th Premier League clean sheet of the season…

We never take Ali for granted and he’s the best goalkeeper in the world by a country mile. Even when he’s not got a lot to do, he still stays alert when balls are in behind and he’s clearing the ball. Sometimes people who just come and watch maybe forget about that stuff and easily can take him for granted - but we definitely don’t. He’s a fantastic ‘keeper, he’s a fantastic person and he made a couple of big saves today. That’s what he’s there for and what he gets paid for I suppose, but when he does that, it gives us confidence we have all the confidence in the world in him.