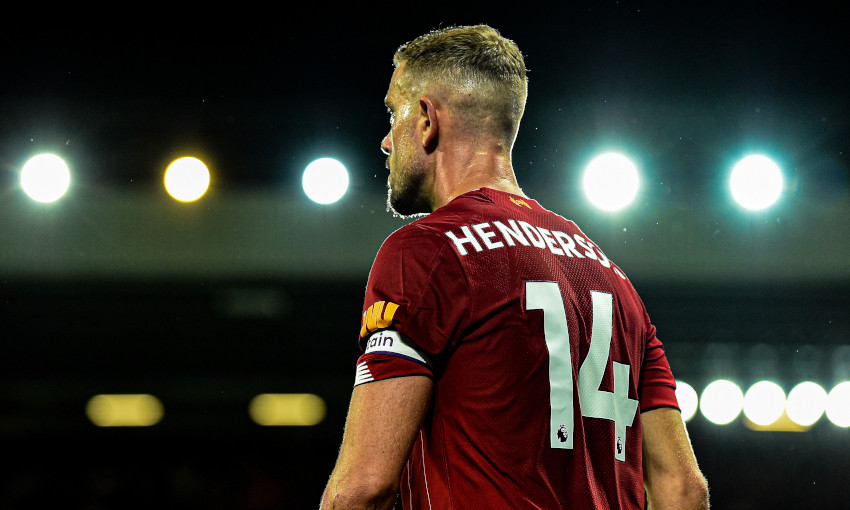 On June 9, 2011 the Reds completed a deal to sign the midfielder from Sunderland, who would go on to become the club’s fifth European Cup-winning captain.

So far, Henderson has played 359 games, scored 28 goals and lifted four trophies – including three, in 2019, as skipper.

On the anniversary of his arrival, we look back at the No.14’s Liverpool tale to date... 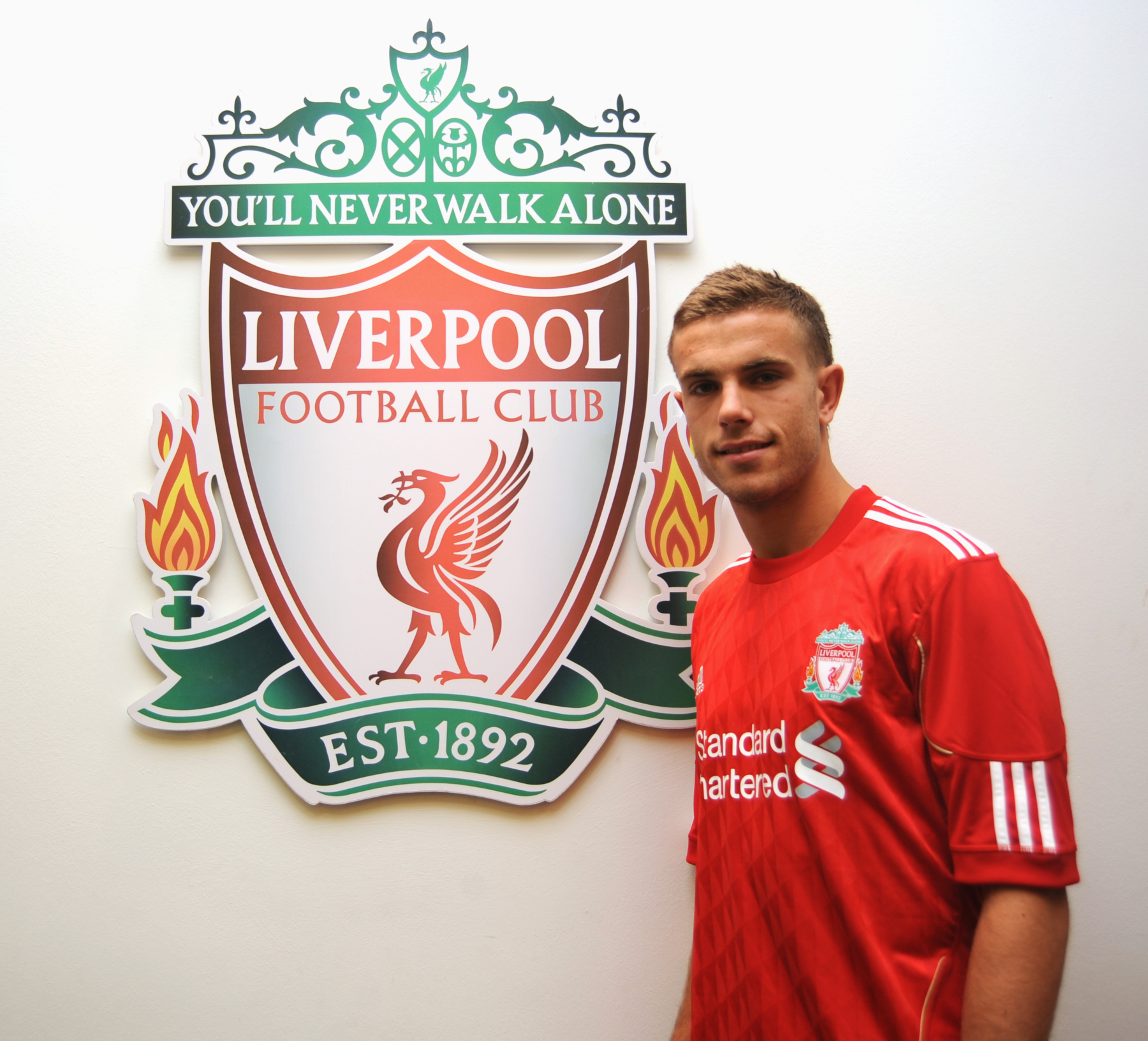 Henderson makes the move to Merseyside after two seasons of Premier League experience with Sunderland, becoming Kenny Dalglish’s first signing of the summer.

The No.14 debuts for the club against his former team in the campaign opener and then registers his first Reds goal a fortnight later, a cool finish past Bolton Wanderers at Anfield.

Often used on the right-hand side of the midfield throughout his opening year, Henderson goes on to feature in all but one Premier League game as Liverpool end up in eighth.

It’s a more prosperous story in the cups, though.

He starts both the League Cup final – won after a penalty shootout against Cardiff City at Wembley – and the FA Cup final, which Dalglish’s men narrowly lose to Chelsea. 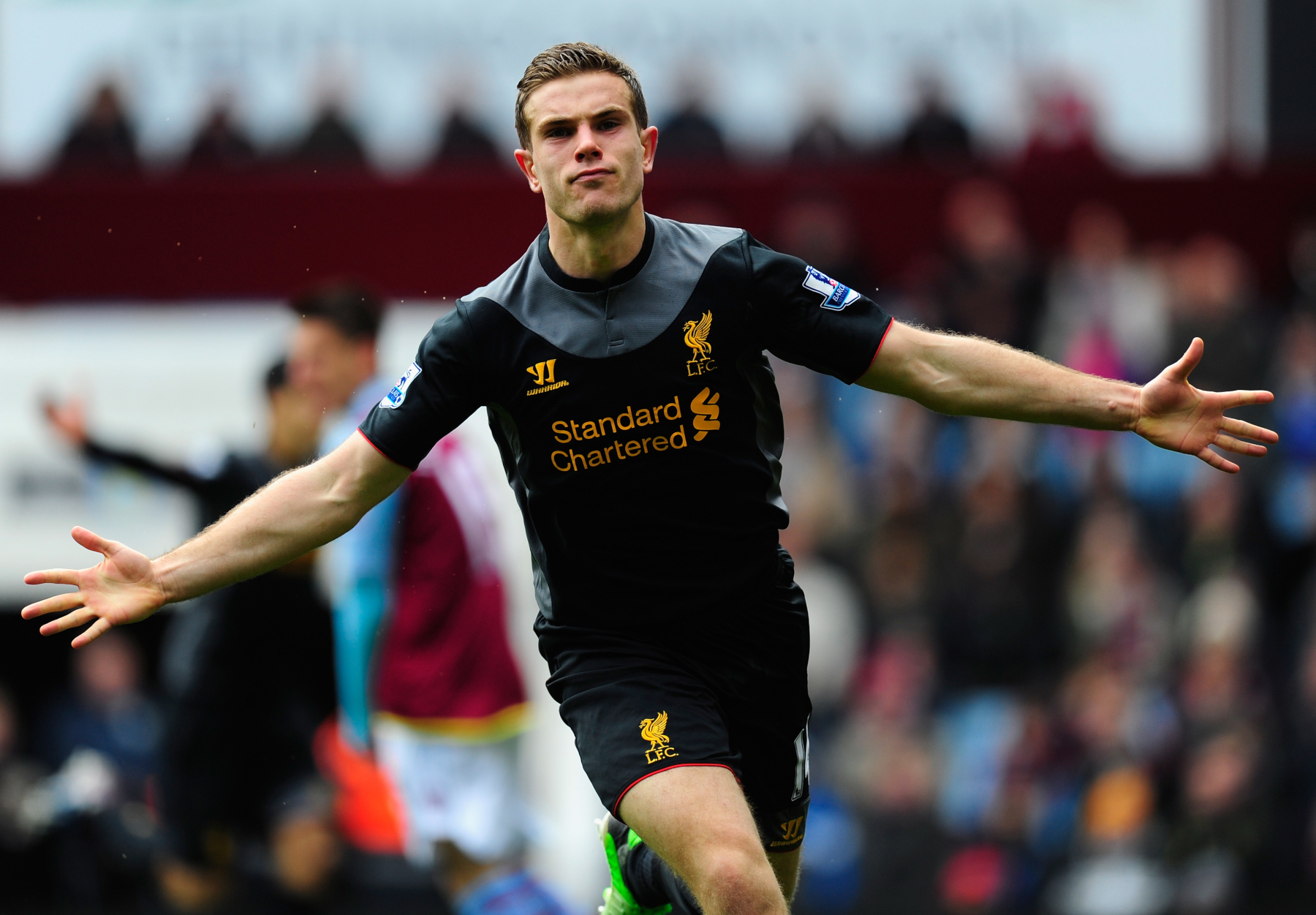 The summer of 2012 sees Brendan Rodgers appointed Liverpool manager and speculation ensue regarding Henderson’s future, but he is unequivocal about remaining on Merseyside.

That decision proves pivotal and the subsequent season proves a turning point for him as he claims a regular starting position by the campaign’s conclusion.

“That was a crucial period in my career. Not only my Liverpool career but my career in general,” he later explains. “I thought that moment was big, and it was a tough moment, but one that I feel helped me, looking back now.

“I don’t know what would have happened if I didn’t have that moment. It was tough at the time but thankfully it worked out OK in the end.

“To be fair to Brendan, he was brilliant with me after that point; he helped me grow as a player and as a person, and I really matured under him. It was a blessing in disguise really.” 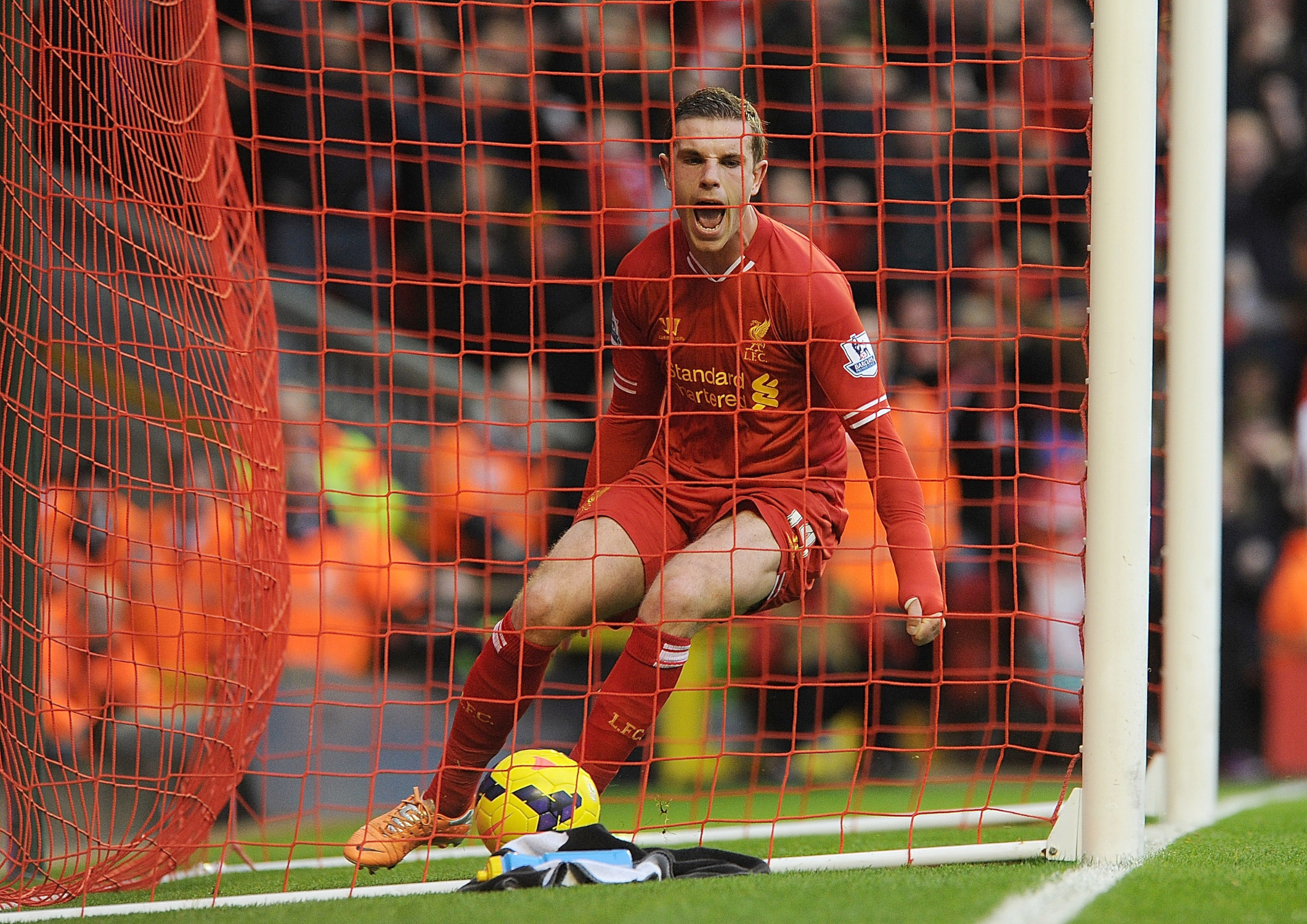 Henderson’s influence continues to blossom into 2013-14, with his energy, athleticism and touch becoming fundamental to Rodgers’ system.

By now deployed predominantly as part of a central midfield three, he visibly grows in confidence as the firepower of Daniel Sturridge and Luis Suarez catapults Liverpool into an unexpected title assault.

Such is Henderson’s consistency, he starts 35 of 38 Premier League fixtures across the season, missing the other three due to an untimely suspension.

Agonisingly, it’s during his absence from the XI that the Reds drop vital points in the title race and have to settle for a second-place finish behind Manchester City. 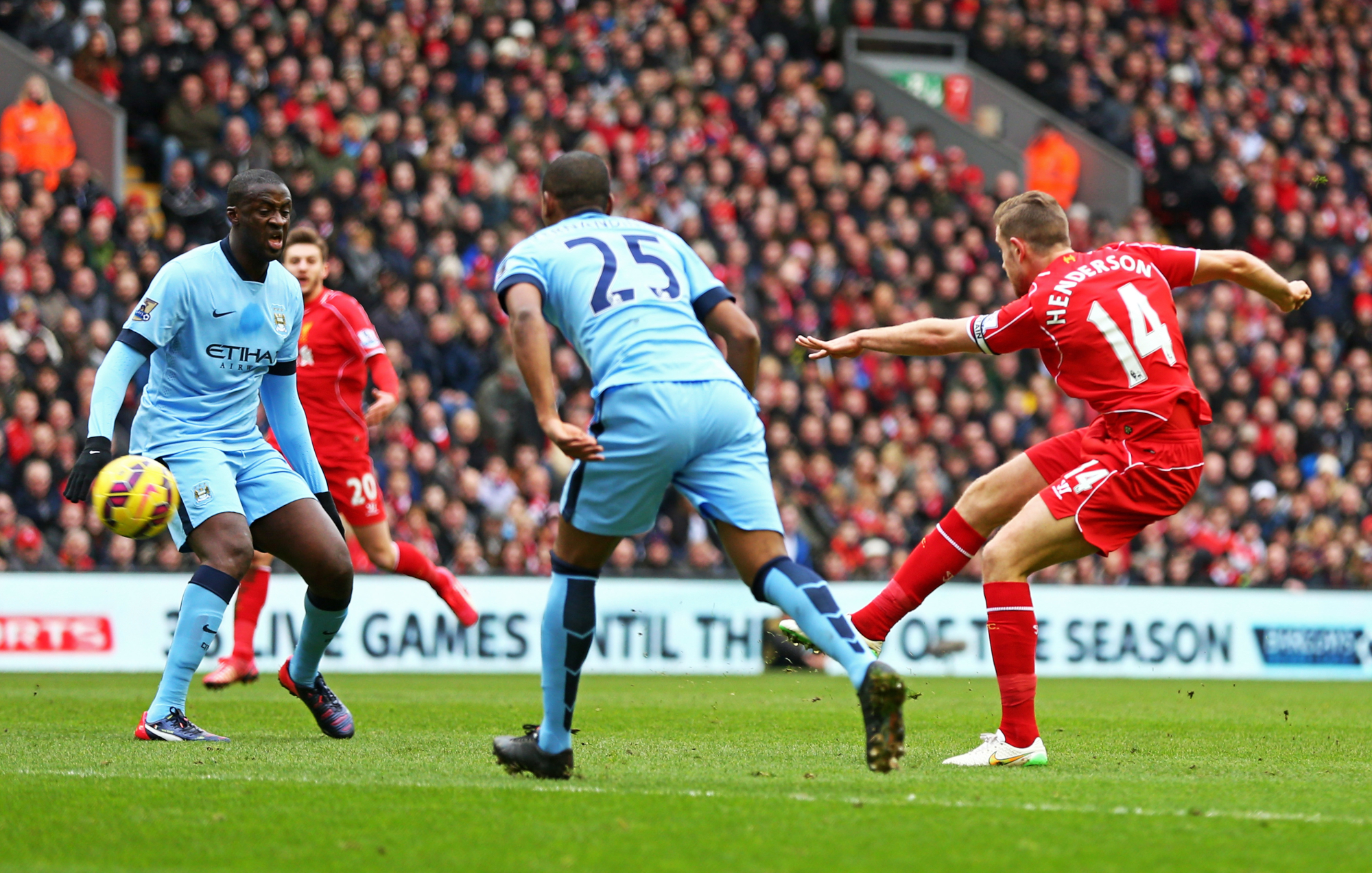 Henderson’s stature is recognised in his appointment as Liverpool vice-captain, supporting Steven Gerrard, early in the following season.

Statistically, it’s the England international’s most productive single campaign for the Reds, with 54 appearances in all competitions and seven goals.

As a collective, however, Rodgers’ charges are unable to build on the progress of the previous year and drop down to sixth in the Premier League standings.

Hopes of an FA Cup triumph to mark Gerrard’s final year at Anfield are also extinguished at the semi-final stage due to defeat by Aston Villa at Wembley. 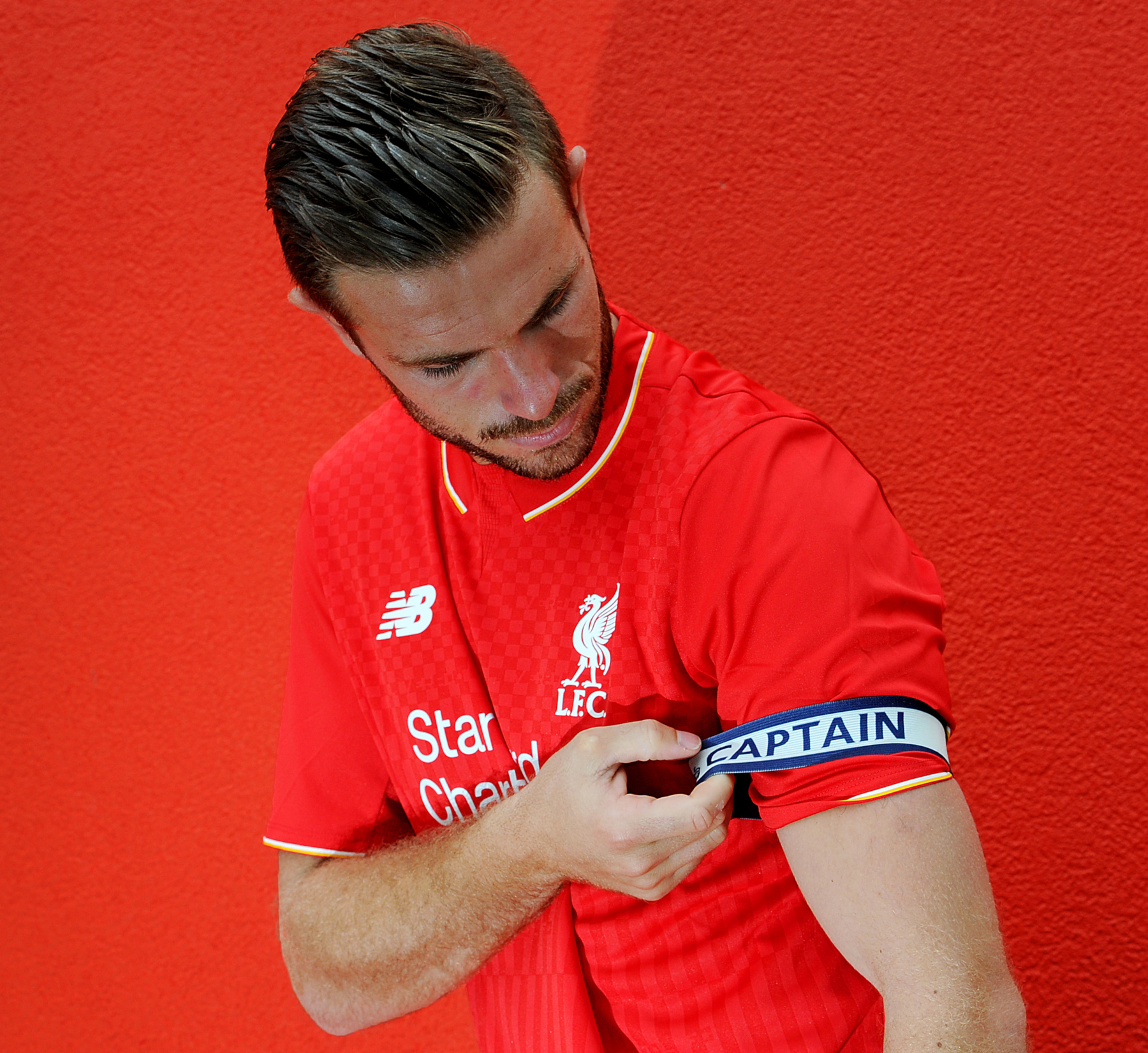 Henderson takes the captain’s armband permanently in the summer of 2015.

“I’ve learnt a lot off Stevie and how he conducted himself as the captain of this club both on and off the field,” says the midfielder upon the announcement. “You’ll always learn from top players – and Steven was exactly that.

“I’ll use what I learnt from him to help me, but I also have to do things in the way I think is right.

“I’ll carry on from what I was doing last season and I’ll also try to take on more responsibility for the team and my teammates. We all have the same goal – and that’s to bring success to this club and our incredible supporters.”

Soon there is a change in the dugout, too, as Jürgen Klopp takes the reins from Rodgers, though injury limits Henderson’s availability to the new boss and, with Liverpool having already lost the League Cup final, he remains on the bench as the campaign concludes with defeat in the Europa League final. 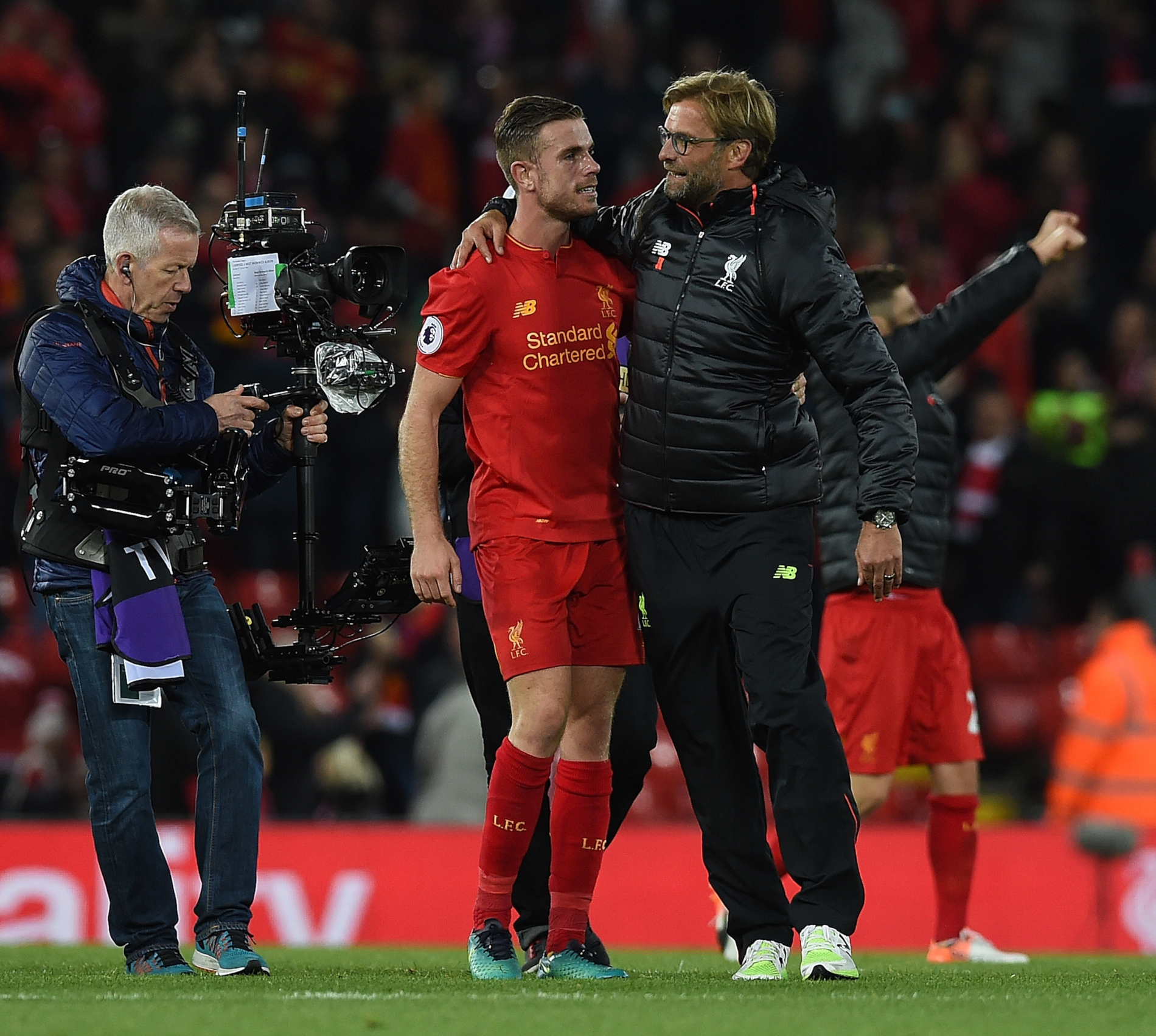 The skipper switches to a deeper-lying role in Liverpool’s midfield as the foundations for the club’s return to Europe’s elite are laid by Klopp in 2016-17.

A strong start to the Premier League season – including a sumptuous long-distance strike from Henderson at Stamford Bridge – sees the Reds match the early top-of-the-table pace.

Their form plateaus in the New Year, though, and a foot injury means Henderson’s final contribution to their quest for a top-four finish comes in mid-February.

Klopp’s men go on to get the job done, a 3-0 victory over Middlesbrough on the last day of the season securing a much-coveted return to Champions League football. 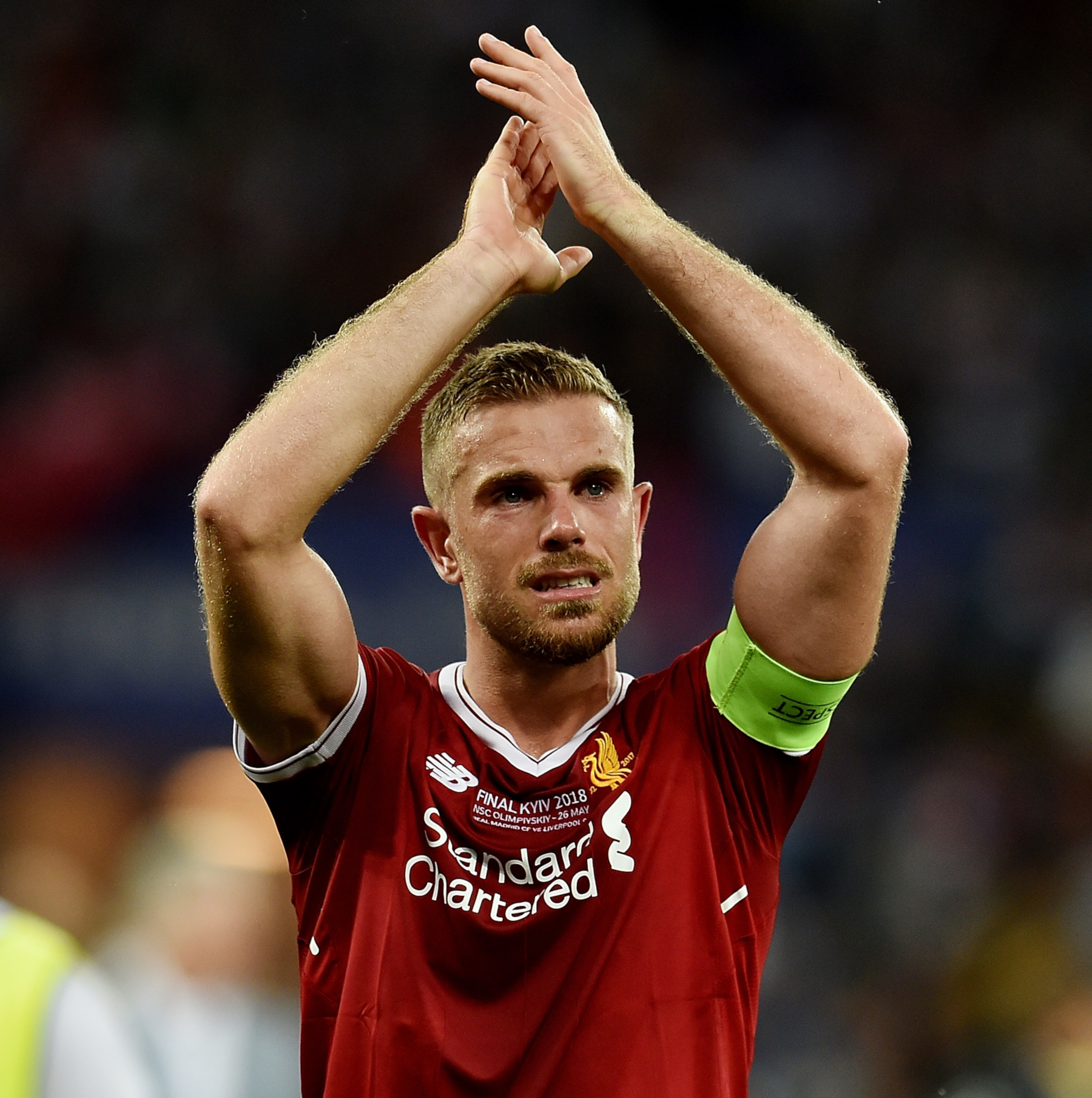 Liverpool’s upward trajectory is maintained as they combine another positive Premier League season with an unforgettable surge to the European Cup final.

Henderson leads the side through an exhilarating continental campaign – including knockout victories over FC Porto, Manchester City and AS Roma – to set up a showdown with Real Madrid, while once again ensuring a top-four finish domestically.

Heartbreak follows in Kiev, a 3-1 defeat again denying the Reds at the last hurdle, but the captain strikes a determined – and significant – tone in his post-match debriefs.

“We’ve got to be proud to get here. We got beat by a fantastic team,” he reasons. “We have got a fantastic team and hopefully we can keep going in the Premier League, the Champions League and the cups as well.” 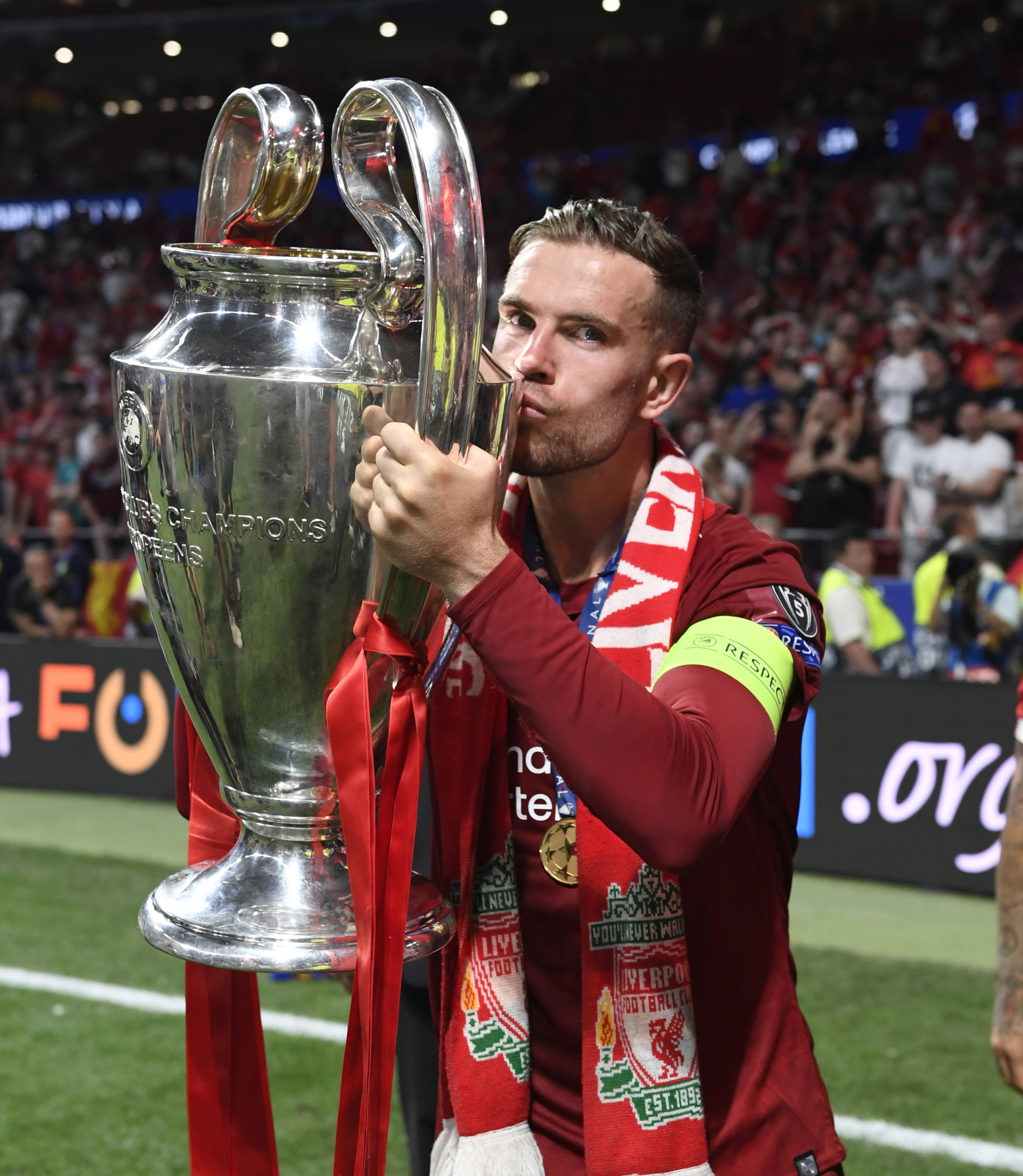 Now into his eighth season at Anfield, Henderson further consolidates his commitment to the club by penning an extended contract a month into the new term.

The captain is unleashed into a more attacking role in the second half of the campaign, with summer signing Fabinho established as Klopp’s midfield shield, and he thrives throughout a run-in that sees Liverpool accumulate a club-record 97 points but still finish second to City.

Compensation comes in the form of a magnificent sixth European Cup.

Back from the brink to overturn a three-goal deficit against Barcelona in the semi-finals – a 4-0 win at Anfield immediately taking up residence in Reds folklore – redemption awaits Henderson and his friends in Madrid.

Tottenham Hotspur are edged out on Liverpool’s second successive Champions League final appearance and the No.14 becomes just the fifth man to lift Old Big Ears for the club. 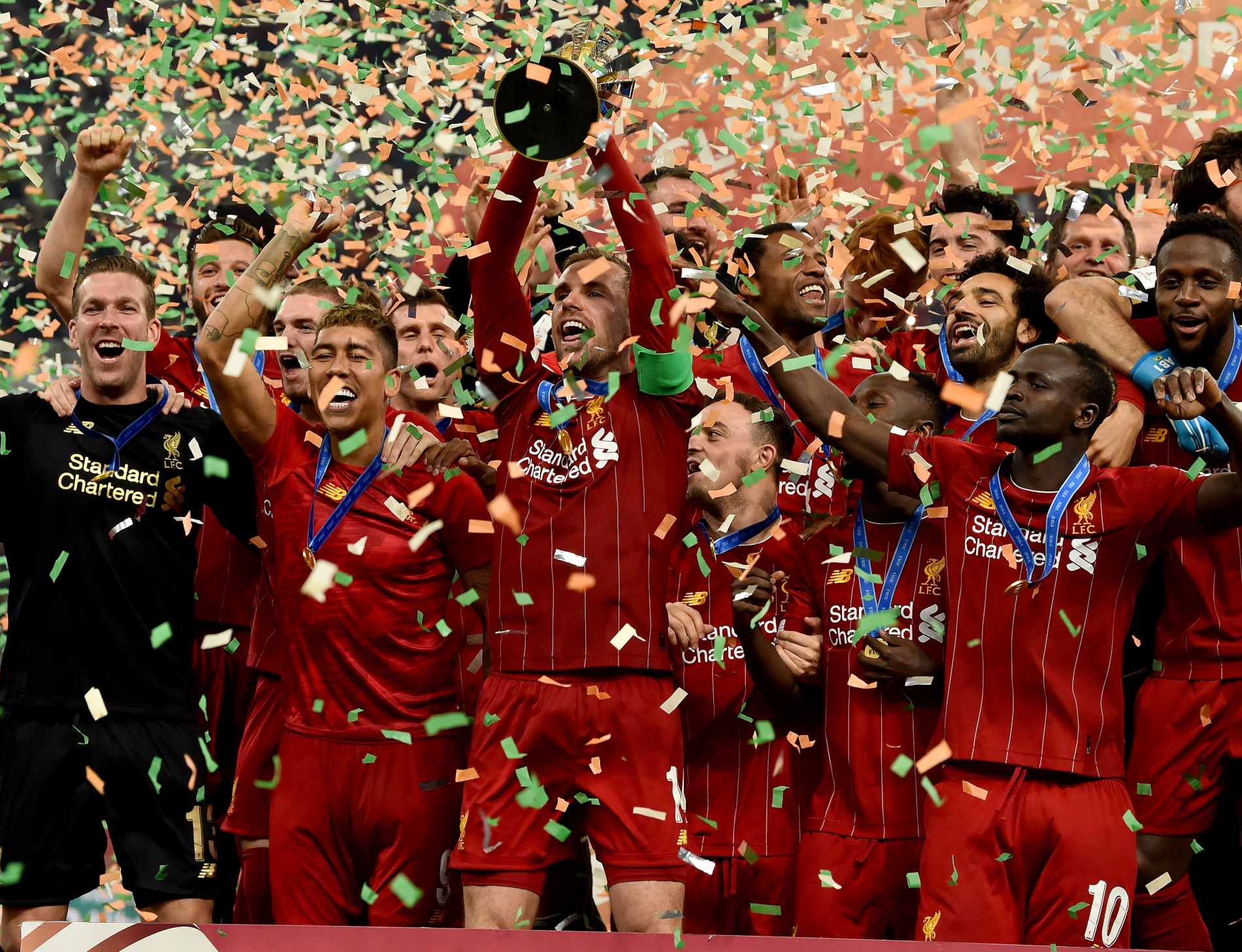 He’s soon lifting silverware as skipper again, the Reds beating Chelsea on penalties to clinch the UEFA Super Cup in the first month of the new campaign.

By December, with Klopp’s men still undefeated in league football and building a healthy lead at the Premier League summit, Henderson dusts off his trophy shuffle once more.

Flamengo are defeated 1-0 in extra-time in Qatar – Henderson playing a key role in setting up Roberto Firmino’s winning goal – and he becomes the first Liverpool captain ever to collect the FIFA Club World Cup.

Back on home soil, they power towards their goals relentlessly and while Watford halt their remarkable 44-match run without a loss in the top flight, a 25-point lead is held when the season is paused due to the COVID-19 pandemic.

He and his teammates now know they are set to restart their title pursuit on June 21, with six points required for Henderson to get his hands on the Premier League trophy.