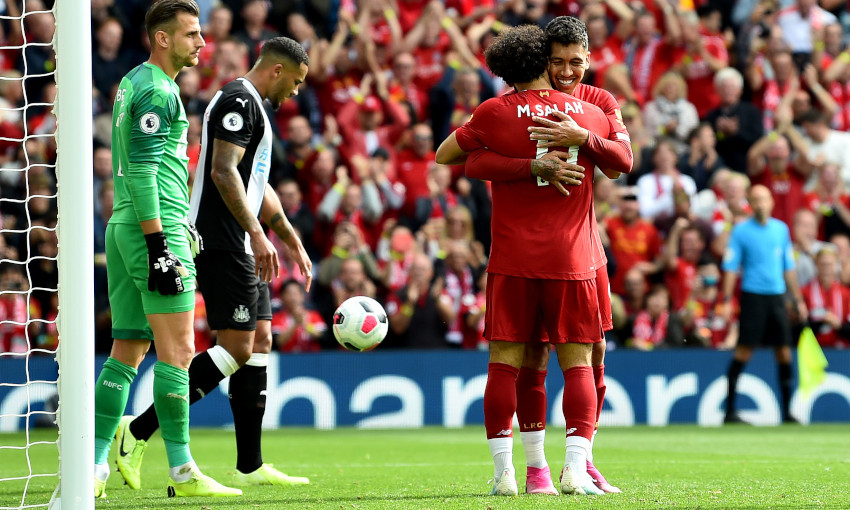 Liverpool continued to lay strong foundations for a Premier League title challenge in September by winning each of their three games in the division.

Jürgen Klopp’s charges returned from the first international break of the campaign with a lunchtime kick-off against Newcastle United – and found themselves behind after just seven minutes due to Jetro Willems’ blast.

But Sadio Mane brought the Reds level with a sumptuous curler before Roberto Firmino, on as a substitute, laid on goals for Mane and Mohamed Salah to secure a 3-1 win.

The latter effort – created by an inventive piece of footwork from Firmino and finished in nerveless fashion by Salah – was later recognised as the club’s Goal of the Month.

Liverpool conquered Stamford Bridge eight days later, surging into a 2-0 lead at the interval courtesy of Trent Alexander-Arnold’s thunderous free-kick and a Firmino header. The visitors clinched three points despite N’Golo Kante responding for Chelsea in the second half.

They won again in the Premier League the following weekend, though were indebted to a goalkeeping error to overcome Sheffield United on their own turf.

Georginio Wijnaldum’s strike went through the grasp of Dean Henderson with 20 minutes left to play at Bramall Lane, making it seven successive wins to start the season.

Liverpool also began their defence of the Champions League and their Carabao Cup campaign in September, with mixed results in the month.

Klopp’s men were beaten at Napoli for the second year in a row, this time going down 2-0 at Stadio San Paolo, but a team blending experience and youth – including five debutants – eased to victory at Milton Keynes Dons by the same scoreline with James Milner and Ki-Jana Hoever on target.

In between times, the Reds – specifically Alisson Becker, Klopp and Virgil van Dijk – had returned to Italy for the glamour of the annual FIFA Best Awards in Milan.

Alisson was named Best Men’s Goalkeeper and Klopp the Best Men’s Coach for 2019, while Alisson and Van Dijk were announced in the FIFA FIFPro Men’s World11.